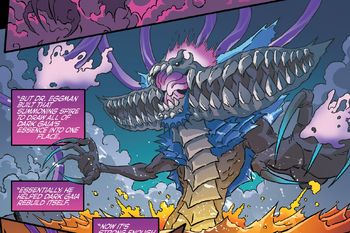 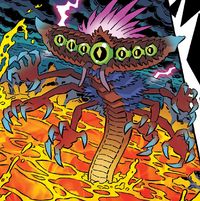 Dark Gaia is a character that appears in the Sonic the Hedgehog comic series and its spin-offs published by Archie Comics. It is a malevolent primordial deity residing beneath the surface of Sonic's World which instigates corruption and the supposed destruction of the world.

Age: Existed since the very beginning of time

Range: Tens of kilometers. Planetary with attacks and abilities.

Intelligence: Dark Gaia possesses centuries worth of combat experience, and it was able to fight Super Sonic for a period of time

Weaknesses: It can be caused great pain if its eyes are attacked with sufficient force