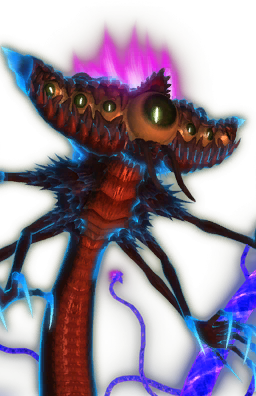 Dark Gaia is one of the main antagonists and the final boss of Sonic Unleashed. It is a primordial hyper energy organism from the dawn of time and the incarnation of darkness, night and destruction. Since its birth, Dark Gaia has been in an eternal conflict with Light Gaia, where they maintain a cycle of destruction and rebirth of the planet.

Age: Existed since the very beginning of time

Attack Potency: At least Large Planet level (Managed to shatter the planet while greatly weakened to the point that it couldn't sustain its own body) | Multi-Solar System level (Vastly stronger than before, as it absorbed the vast amount of energy that Werehog Sonic held. Could contend with both Light Gaia and Super Sonic, although it was overwhelmed)

Weaknesses: Dark Gaia is a huge target, and its eyes are its main weak spot, which are also very large. Must fully mature before it is able to use its full power.