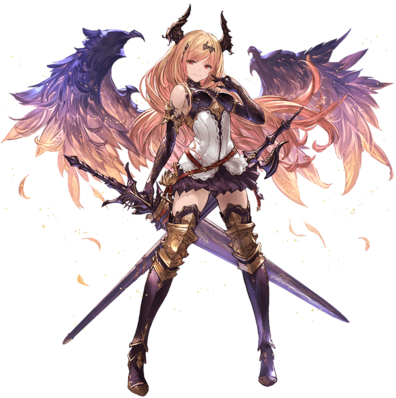 Olivia is an archangel who wields the powers of dusk, she was sealed at the bottom of the sky after defying her lords and their Creator. But her ambition for rebellion remains ever-sharp, honed by the hands of mighty figures who gave her a second chance to roam the sky realms. Hiding eclipsed behind the singularity, she keeps watch for the supreme primarch in the hopes of reviving her brethren.

Powers and Abilities:  Superhuman Physical Characteristics, Weapon Mastery, Master Hand-to-hand Combatant, Flight, Immortality (1, 2, 3, 4, 5 and 9, 8 in her true form), Non-Corporeal and Abstract Existence in her true form (Type 1; Primals, in their true forms, are abstract without any kind of form, representing their elements or abstractions), Regeneration (Mid-Godly; Primals are capable of regenerating after being reduced to their concept), Resurrection (Primals can resurrect themselves, though this takes extremely long amount of time thus it's not combat applicable), Dimensional Travel, Deconstruction (Can deconstruct others with power of dusk), Summoning (Primals can summon monsters), Aura, Damage Boost, Power Nullification (Capable of nullifying opponent's abilities to use special attacks and buffs), Statistics Reduction (Capable of reducing defense and speed), Energy Manipulation (Capable of reducing enemies' energy), Capable of dealing plain damage, ignoring the likes of damage cut, barriers, buffs, debuffs and even Invulnerability, with fixed amount of damage thus bypassing durability to an extent, Statistics Amplification, Weapon Creation (Can create blades made out of energy), Limited Probability Manipulation (Can boost the chance of critical hit and debuff success), Mind Manipulation (Those who sees her blades willingly surrender themselves to die), Pain Manipulation (Her blades can dish out unyielding pain), Forcefield Creation, Avatar Creation (With help of her comrades, she was able to create an avatar of some sort for her to roam around the sky realm while her true self is sealed within the Crimson Horizon), Darkness Manipulation, Possible Fate Manipulation (Her concept is dusk, representing the beginning of the end of things, thus she is able to giving anything a fitting ending), Empathic Manipulation (Anyone who sees her blue abyss will be filled with inescapable horror), Soul Manipulation (Capable of sending souls to the abyss, where they can never return), Fire Manipulation, Resistance to Chaos Manipulation (Was able to survive being sealed in Pandemonium, which is inside Crimson Horizon, a place full of unadulterated chaos before the world existed), Mind Manipulation (Her true mind is still in the Pandemonium and her current mind is nothing more than a fraction of her psyche), Petrification, Statistics Reduction, Sleep Manipulation, Perception Manipulation, Status Effect Inducement, Empathic Manipulation, Gravity Manipulation, Paralysis Inducement, Power Nullification and Poison Manipulation (Has high debuff resistance, which includes all of these effects)

Attack Potency: Planet level (Comparable to other raid bosses such as Medusa who threatens the entire sky realm, a planet sized dimension, with her power) | At least Planet level, likely Multi-Solar System level (Fought against Archangels during the war against Fallen Angels and Archangels and was Archangel herself, thus should be comparable to the likes of Base Sandalphon and Michael, who are laughably to superior to most Primals in Sky Realm)

Stamina: Extremely High. Was able to maintain her avatar for long periods of time and is capable of fighting long battles during the war.

Standard Equipment: Her unnamed two swords, though there are hints that they're names are Fallen Sword.

Intelligence: Extremely High when it comes to combat. Archangels were so strong and skilled in combat that Astrals who are very skilled and has above thousands of years of experience at their disposal, needed to create weaker Primals because they were so skilled and hard to control. She stated that she is expert when it comes to war and called God of War at some instance.

Weaknesses: Weak to Light based attacks. She can't use her special attacks when Overdrive is broken. Her being abstract is only applicable when her power is drained completely, and this is downside than anything else, as Primals in their abstract forms are completely powerless.

Retrieved from "https://vsbattles.fandom.com/wiki/Dark_Angel_Olivia?oldid=5885856"
Community content is available under CC-BY-SA unless otherwise noted.