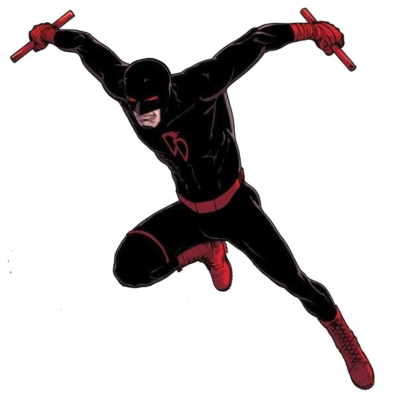 Born in the historically gritty or crime-ridden, working-class Irish-American neighborhood of Hell's Kitchen in New York City, Matthew "Matt" Michael Murdock is blinded by a radioactive substance that falls from a truck after he pushes a man to safety from the oncoming vehicle. While he no longer can see, the radioactive exposure heightens his remaining senses beyond normal human ability and gives him a "radar sense". His father, a boxer named Jack Murdock, supports him as he grows up, though Jack is later killed by gangsters after refusing to throw a fight. After donning a yellow and dark red costume (later all dark red), Matt seeks out revenge against his father's killers as the superhero Daredevil, fighting against his many enemies, including Bullseye and Kingpin.

Powers and Abilities: Superhuman Physical Characteristics, Enhanced Senses (To compensate for his blindness, his other four senses are greatly enhanced to levels that far exceed anything humans are capable of in real life. He also has a radar sense [which a misnomer, since it works more like a sonar] meaning he can track objects around him via sound pulses), Martial Arts, Weapon Mastery (Skilled in the use of sai, archery, and his baton), Stealth Mastery, Limited Precognition, Acupuncture (Adept in numerous nerve pinches and strikes), Pain Manipulation (Can simulate extreme pain with nerve strikes) Status Effect Inducement, Telepathy (Could mentally communicate with Stick), Resistance to Mind Manipulation (Has resisted both the Purple Man and his children's attempts to control his mind, stopped Psylocke from entering his mind), Fear Manipulation (Resisted a fear-inducing gas) and Status Effect Inducement (Quickly recovered from a tranquilizer), Regeneration (Low, Can meditate to heal his wounds, but it requires extreme concentration and time) | Same as before, Absorption (Took in Ghost Rider's Hellfire), increased Regeneration

Lifting Strength: At least Class 1 (Swung a 400-lb weight  as a bo staff before tossing it several feet. Ripped a demon in half. Has repeatedly wrestled with the Punisher, who can snap necks) | Class M (Easily tossed around Spider-Man and Luke Cage)

Stamina: Superhuman. Even after being electrocuted, hit by a bus and blasted with a sound attack that damaged his enhanced hearing he was still capable of defeating Klaw | Very High

Range: Several meters with his club and grappling hook

Standard Equipment: A specially modified billy club with a grappling hook inside made of aircraft control cable with a steel hook, which is spring-loaded. It can also split in two parts, a baton for melee combat and a bladed hook weapon.

Intelligence: Gifted (Master of multiple martial arts as well as the legal system, being a criminal defense attorney in his civilian identity. Designed a bio-mimetic battle armor and his original Baton.)

Other: This profile only covers Matt Murdock Daredevil from the 616 Marvel universe, not the movie version or any other version