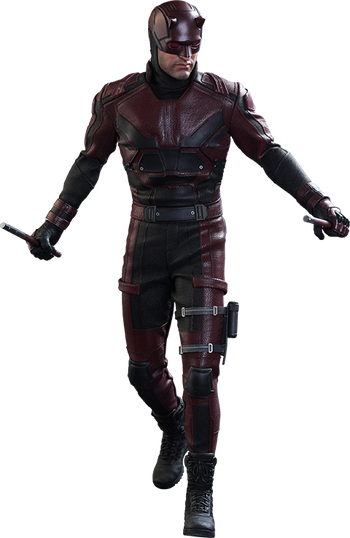 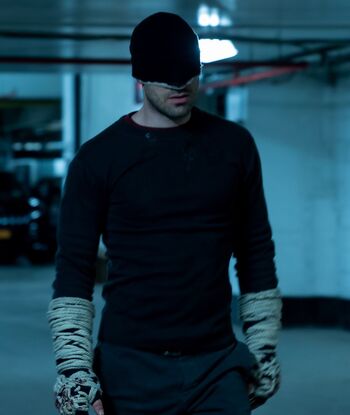 Matt Murdock is a blind lawyer in New York City's district of Hell's Kitchen where he runs a firm with best friend Franklin "Foggy" Nelson. As a child, Matt was blinded by a toxic waste spill yet enhanced Matt's other senses and gave him sonar to "see" via sonic vibrations. Matt was then orphaned when his boxer father "Battling Jack" Murdock was killed after refusing to turn in a fixed fight for a mobster. After his father's death, trained by the ninja Stick and attending law school, Matt promised to stop all crime in Hell's Kitchen as a nightly vigilante crime-fighter. In time, gaining specially designed body armor that would not compromise his mobility, Murdock's alter ego came to known as the Devil of Hell's Kitchen: Daredevil.

Attack Potency: Wall level (Smashed Bakuto through concrete blocks. Can hold his own against Elektra and the Kingpin, and almost beat the latter to death. Broke walls by pushing Kingpin through them. Broke a door by kicking a man at it. Fought with Bullseye and broke walls by kicking him through it)

Speed: Subsonic with Supersonic+ combat speed and reactions (As fast if not faster than Luke Cage. Can easily blitz large groups of thugs before they can react. Dodged a handgun bullet from Punisher at point-blank range), higher when combined with his senses (Managed to react to the bullets from a M4 Carbine after they were fired)

Lifting Strength: At least Class 1 (Can grapple with Kingpin who can easily rip open steel handcuffs. Comparable to Bullseye and Punisher)

Striking Strength: Wall Class (Breaks bones with ease and can fight against the likes of the Kingpin. Made Kingpin bleed with his hits and later nearly beat him to death)

Stamina: Very high. Has taken hours worth of multiple beatings and still came out on top.

Weaknesses: Other than his blindness, Daredevil has few weaknesses. But he inherited his father's ferocity that can overtake him in some fights.