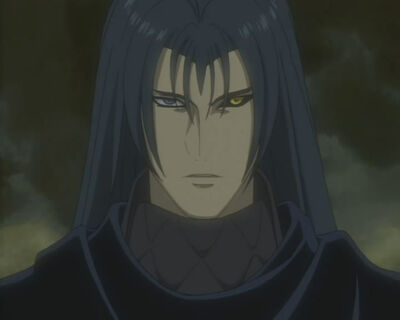 Lord Darcia III is the main antagonist of Wolf's Rain and is the third and last generation of the Darcia family of nobles, who were cursed after Darcia I disappeared into Paradise. The curse is visible as a golden wolf's eye; replacing his left. Darcia is not a half breed but is descended from a wolf clan who chose to be completely human. His wolf form is a giant dark purple wolf with one blue eye and one gold, the largest wolf form of all wolves shown.

Tier: 9-B normally, 8-B with Noble's technologies

Attack Potency: Wall level normally; City Block level with Noble's technologies (Can create a huge energy blast, which is able to destroy at least a hill)

Speed: At least Subsonic (Even superhumans cannot see his movements)

Retrieved from "https://vsbattles.fandom.com/wiki/Darcia?oldid=4109753"
Community content is available under CC-BY-SA unless otherwise noted.