Daniel J. D'Arby is a professional gambler who has, throughout his life, used his Stand, Osiris, to steal the souls of those he defeats. One of the many Stand users recruited by DIO, he, as one of Egypt 9 Glory Gods, opposes the Stardust Crusaders once they arrive in Egypt, challenging them, one by one, to various games with their souls themselves at stake.

Powers and Abilities: Enhanced sense of touch, Extrasensory Perception (Capable of seeing ghosts and souls among some other supernatural forces that are normally otherwise invisible), Aura and Summoning (Of his Stand), Osiris has Soul Manipulation (Osiris has the ability to steal the soul of anyone who loses to D'Arby, or when they admit defeat in their heart, and the souls of others can be gambled and taken as well. He can seal these souls into poker chips and split them for use in gambling), Invisibility (A Stand can only be seen by other Stand Users), Non-Corporeal (Stands are the incorporeal manifestations of their user's fighting spirit and can only be harmed by other Stands), Non-Physical Interaction (Stands can interact with ghosts and other Stands) and Aura

Speed: Normal Human with possibly Massively FTL reactions (Jotaro believed that he'd see through any attempt he made to cheat with Star Platinum)

Stamina: Physically average, but D'Arby has a strong mind.

Range: Thousands of kilometers with Osiris (It could even claim Holly's soul in Japan from Egypt).

Standard Equipment: His Stand, Osiris, and materials for gambling.

Intelligence: D'Arby is a practiced gambler and cheater, a professional who claims to be the greatest gambler in the world and to have never lost. While he is certainly skilled in all sorts of games, he prides himself on his ability to cheat, using his vast funds to rig games in his favor or thinking up methods to cheat in any game on the spot. He's practiced in sleight of hand, using its techniques to second deal and even memorize the location of every card in a deck. D'Arby's intelligence is such that he outcheated Joseph Joestar and nearly defeated the Stardust Crusaders single-handedly.

Weaknesses: Any damage Osiris takes will presumably be reflected onto D'Arby. He needs his opponent to agree to gamble their soul for Osiris' abilities to function properly. D'Arby's fear of DIO is so great that it can actually effect his nerves when the bets have to do with DIO specifically, to the point that he passed out from the pressure when gambling information on The World. 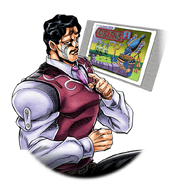 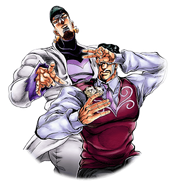 L (Death Note) L’s Profile (Game played was poker, neither had prep time or knew a thing about the other)

Mary Muldoon (Hit and Misdemeanor) Mary’s profile (Speed was equalized, Mary was not given a gun)