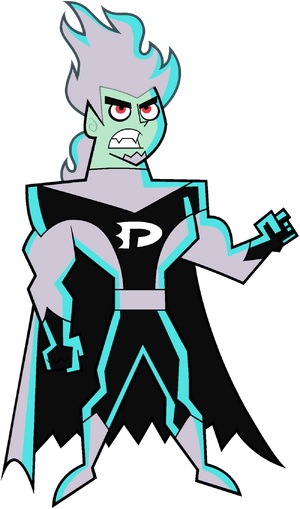 Dan Phantom is Danny Phantom 10 years in the future. After a terrible accident that causes the death of his family and friends, Danny Fenton goes off to live with his arch-rival Vlad Masters, being the only person that could understand what he was going through. He then asks Vlad to separate his ghost half from his human half. While Vlad agrees and was successful in separating the two, Danny's ghost half proceeded to do the same thing to Vlad and then overshadowed him. The two fused and Vlad's ghost half overwhelmed Danny's which resulted in Dan's creation.

Mind Manipulation and Empathic Manipulation (Completely uneffected by Sayonara Pussycat's passive empathy manipulation which caused everyone in the movie thearter to fall in love with her, easily resist the effects of Ember McLain's music which can control the minds and emotions of hundreds of students and the entire female population of Amity Park, Can withstand attacks from other ghosts that effect the mind, Dan has lost all of his humanity and can no longer feel empathy for others), Disease Manipulation (Ghosts are unaffected by the ghost mosquitoes' bite which caused the students at Danny's school to become sick), Possession (Resisted Poindexters attempt to possess him and easily kicked him out the next time), Soul Manipulation (Repeatedly resisted Freakshow's attempts to control him with a staff that allowed him to control ghosts, can withstand attacks from ghosts that effect the soul), Power Nullification (Can pass through the anti ecto walls of the Fenton lab with no issue, Danny could still use his ice powers even after Undergrouth's plants nullified his powers, the Specter Deflector couldn't completely negate Vlad's powers, Skulktech 9.9 stated the Phantom Palm Pummeler which negated Danny's powers didn't work on Dan), Ice Manipulation (After learning how to control his Ice Powers during season 3, Danny's body no longer was effected by his cold core that froze his body from the inside out), Sleep Manipulation (Resisted the effects of knock out gas designed to effect ghosts), Biological Manipulation (Resisted Possession which effects the body on a moleculer level, resisted his clones attempt to forcable transform him), Cosmic Radiation (Danny was able to survive in space without any issue during his battle with Vlad in the final episode of the series), Precognition (Vlad was able to sneak into a room full of Observants and surprise all of them, the Observants are stated to be able to see the future and have seen events up to 10 years into the future), Time Manipulation (Clockwork's Medallion grants him resistance to time manipulation and the rules of time)

Attack Potency: Multi-Solar System level (He caused destruction throughout the Ghost Zone for 10 years and is stated to be a threat to the future of Ghost Zone which contains ghosts powerful enough to fight Pariah Dark and create realms with many stars which would require around this level of power)

Speed: At least FTL, likely Massively FTL (Far faster than season 3 Danny who can easily move this fast, likely comparable to other top tier ghosts in the series like Pariah Dark)

Stamina: Very High (He should superior to Danny who could fight ghost for a whole day non-stop)

Range: Standard melee range, Hundreds of meters with energy blasts and Ghostly Wail, Interdimensional with Portal Creation (He can open portals to and from the Ghost Zone which is a different universe)

Standard Equipment: A Time Medallion created by Clockwork allows Dan to travel through time and makes him unaffected by the rules of time.

Intelligence: Extraordinary Genius (Possesses the intelligence of both Danny and Vlad)

Weaknesses: Ghosts are physically incapable of interacting with the real world unless they make themselves a physical form. While invisible, ghosts can be seen using infrared vision due to their bodies giving off heat. They can be harmed and have their powers nullified by the effects of Blood Blossoms, Ecto-ranium, and Anti-Ghost Technology like the Specter Deflector. If distracted, his Ghost Sense will not go off.