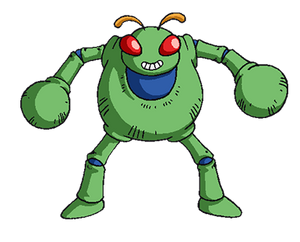 Damon was one of the hidden warriors on Team Universe 4 who fought in the Tournament of Power.

Durability: Unknown (It was noted by Roshi that Goku and 17 could have accidently killed him if they hit him; mainly used his size to avoid getting hit)

Intelligence: Cunning fighter, capable of utilizing his small size to hide his presence and catch enemies by surprise.

Retrieved from "https://vsbattles.fandom.com/wiki/Damon?oldid=6183990"
Community content is available under CC-BY-SA unless otherwise noted.