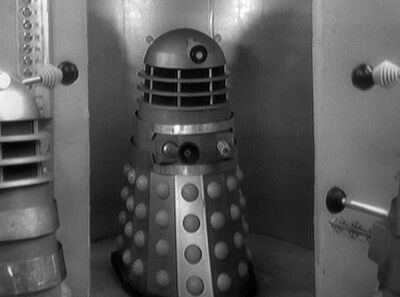 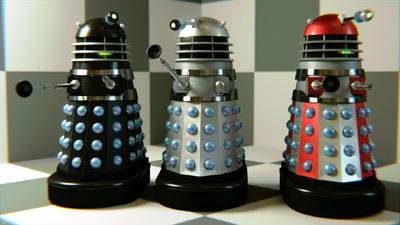 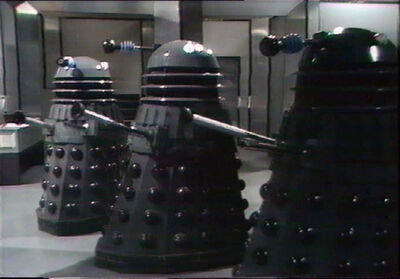 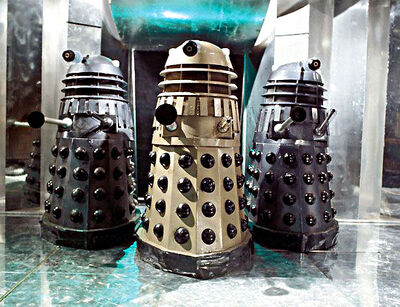 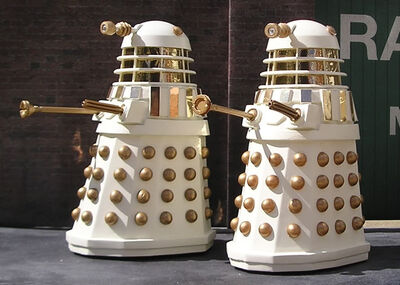 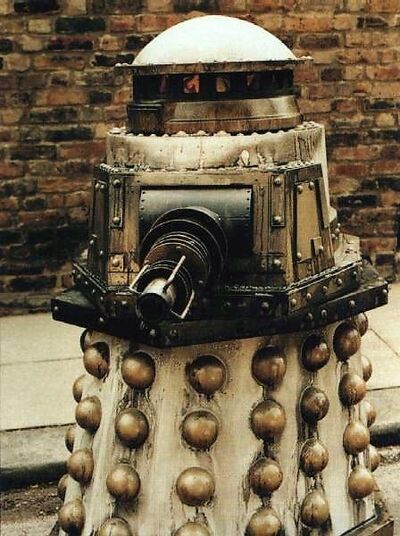 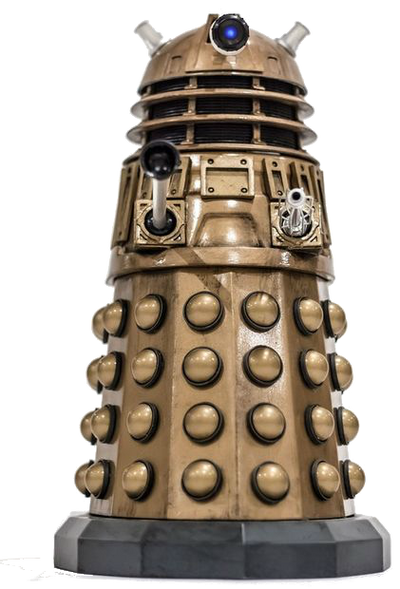 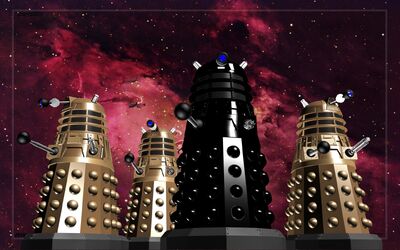 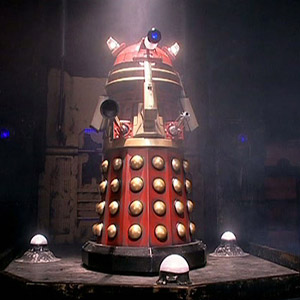 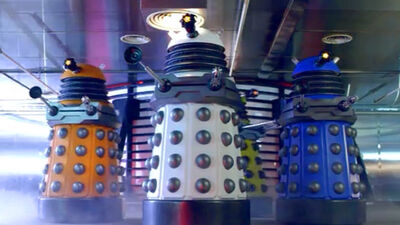 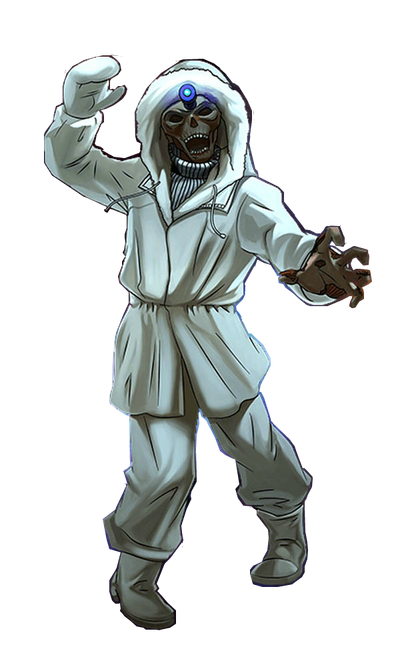 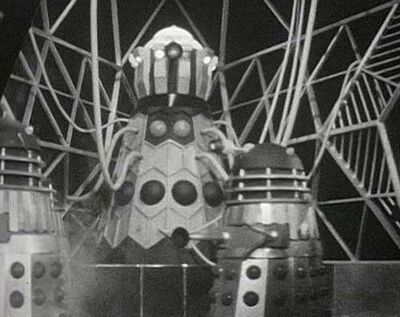 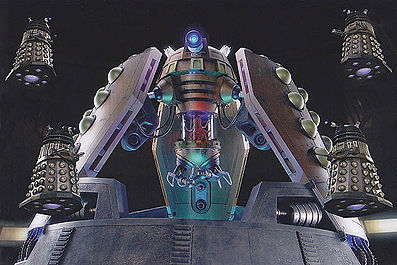 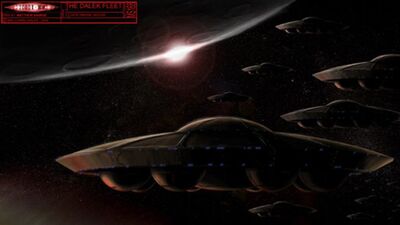 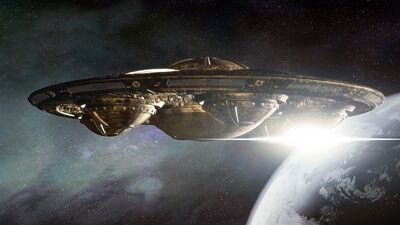 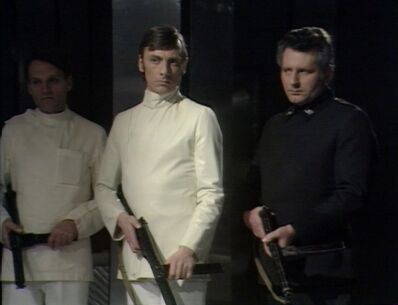 The Daleks, formerly designated Mark III Travel Machines, originated Skaro as a result of mutative radiation in the planet's wastelands from a 1000 year war with the Thals. The Daleks' creator, Davros, programmed them to maintain their existence by exterminating all non-Dalek life.

The Time Lords foresaw a day where the Daleks conquered the universe and sent The Doctor on a mission to avert the Daleks' creation, alter their evolutionary path or discover an inherent weakness. The attempt delayed the Daleks for 1000 years and left Davros alive. Various groups consider this to be the action that led to the Last Great Time War.

The Daleks acquired more advanced technology, allowing them to eliminate the Temporal Powers and engage the Time Lords in a brutal war, quickly spreading throughout time and space, shattering dimensions and burning histories. Both factions seemingly vanished from time and space, thought to have been destroyed by the Moment, however, the ensuing blast was, in reality, the Daleks' own crossfire.

Civilization Type: Intergalactic Civilization (During their early history, the Daleks conquered many solar systems surrounding Skaro. Detonated the Seriphia Galaxy, which is 4 times larger than the galaxy with 600 billion stars, and converted it into a power base equivalent to a million Skaros) | Unknown (Aquired vast amount territories throughout space and time. Destroyed almost all of the Temporal Powers as a prelude to the Time War)

Kardashev Level: Between Type I and Type II (Have weapons that can destroy star systems and exist across a multi-stellar to galactic scale, but at first they were limited to just planets or cities) | Type VII (Equally matched the Time Lords in all aspects by the end of the war) | Varies from Type II to Type VII (Post Time War empires could wipe out star systems and destroy planets, but weren't as powerful as they were in the Time War)

Age: Millions of years old (The Dalek's occupation of Earth, which is said to take place in the middle of their history, predates their encounter with The Doctor by a million years, and later iterations exist significantly further into the future)

Population: A "billion billion" during the Last Great Time War

Technology/Abilities: Telepathy (The Dalek pathweb is described as some form of telepathic hive mind), Cyborgization, Self-Sustenance (Type 1 and 2), Energy Projection, Fire Manipulation, Electricity Manipulation, Information Analysis, Enhanced Senses, Telekinesis (Can levitate objects), Flight and Gravity Manipulation, Energy and Radiation Absorption (Stated to have grown accustomed to radiation. Outfitted the Empire State building with Dalekanium panels to attract gamma radiation), Self-Destruction,Resistance to Radiation (Their armor is designed to protect them from the intense radiation on Skaro) and Magnetism (Dalek X is immune to the effects of magnetic fluctuations despite his metal composition)

Technology/Abilities: FTL Travel (Proto 9, one of the earliest Dalek spacecraft, could surpass the speed of light. Can travel across interstellar distances), Spaceflight, Energy Projection, Forcefield, Dimensional Travel (Dimension Ships are, as their name suggests, capable of travelling to other universes. Void Ships can of transversing dimensions, breaking down the walls of reality. Capable of traveling through the Time Vortex), Invisibility, Portal Creation (Can create portals to hyperspace. Oblivion Continuums draw perpetual power from wormholes), Acausality (Stole the data to recreate Gallifrey's Transduction Barrier), Time Travel, Power Nullification (Can inhibit Time Lord Regeneration. Completely shut down the TARDIS to the point where the Doctor destribed it as merely "wood"), BFR with Oblivion Continuum (Can cause worlds to bleed into the next dimension), Resurrection with Varga Plants, Age Manipulation (With the Entropy Engine, they can age the life cycle of planets to the point of destruction. Reversal Waves can devolve opponents), Existence Erasure (The Shadow Vortex and the Annihilator can erase opponents from existence, with the former being able to erase beings from both time and space. Time Destructors can erase whole sections of history), Mind Control, Transmutation (Developed a matter transmuter that could change any element into any other), Reality Warping (Continuity Bombs can alter timelines by reaching along an individual's time stream and altering individual decisions), Disease Manipulation (Plague Missiles can infect entire planets with diseases, destroying all life on it, Varga Plants can infect beings), Vibration Manipulation (Their vibration machines act in a similar fashion to echo location, produce vibrations to detect celestial bodies), Magnetism Manipulation with Magray Ultimate (Changed the mass of multiple asteroids), Radiation Manipulation with Neutronic Bomb, Explosion Manipulation, Plasma Manipulation with Photon Impellers (Can reduce planetary crusts to ionized plasma in minutes), Technological Manipulation, Time Manipulation and Spatial Manipulation (Removed Etra Prime from time and space, a feat that surpasses many of the temporal powers. Stated to have many forms of time manipulation, such as time corridors. The Master implied that the Daleks are one of the few forces capable of affecting TARDISes in the Time Vortex. The Exterminator can compress time-space to move at high speeds. Time wind is a form of temporal radiation that can cause anomalies and glitches in space and time. Time Locked Skaro's history, rendering the Time Lords unable to attack the planet), Duplication and Quantum Manipulation (Quantum causality generators can split ships into infinite parts, creating identical copies), Gravity Manipulation, Black Hole Creation (Can create miniature black holes), Pocket Reality Manipulation (Their engines could create tiny space-time continuums), Resistance to Information Analysis (Daleks Stealth Ships can bypass Time Lord monitoring systems) and Teleportation (Dalek shields can block out teleportation),

Attack Potency: City level (Capable of reducing humans to atoms[1] and destroying other Daleks. The Time Lords believed a single drone would destroy Arcadia. Special Weapons Daleks are significantly more powerful than an average drone and can vaporize other Daleks with a single blast), Higher with Self-Destruction (Created a massive explosion, destroying multiple Daleks and shaking an underground base) | At least City level (More powerful than before, can easily disintegrate Time War Daleks), Higher with Self-Destruction | Planet level (Disintegrated a rogue planet durable enough to survive in stars and planetary collisions. Moved Skaro into the Solar System, destroyed the largest planet in the New Earth system with neutron fire. The Imperial Dalek mothership contains weapons capable of "cracking [Earth] open like an egg" from space[2]. Created the Exterminator to destroy Earth in one blast, stated on multiple occasions to have destroyed planets[3]), Solar System level with Neutron Strikes (Devastates light years of space, collapsing suns into black holes and converting stars into neutron stars). High Complex Multiverse level with Preparation (Recreated the Eye of Harmony. Forcefully controlled The Doctor's TARDIS, a feat on par with the Time Lords, and created copies the vessel to attack Gallifrey. The detonation of the Apocalypse Element could not be stopped by the Eye of Harmony, requiring the Daleks' combined mental energy to successfully dissipate it) | Solar System level, possibly far higher (Stated to be experts at fighting TARDISes. Bypassed all 400 of Arcadia's sky trenches, which almost nothing in the universe is capable of, and almost destroyed the planet and its defences after mobilizing their entire fleet. Destroyed a million stars, Dalek Stealth Ships [which are far more powerful than basic saucers] and Cannons can easily tear apart Battle TARDISes). Universe level with Reality Bomb (With the 27 worlds as a transmitter, the bomb's effect would continue until all matter in the universe was annihilated), Multiverse level+ via Chain Reaction (Had the Daleks succeeded in firing it into the Medusa Cascade, all universes and even the Void would be destroyed), High Complex Multiverse level with Preparation (Comparable to the Time Lords), Hyperverse level with the Eye of Time (Harvested the Eye of Time, which is more powerful than any TARDIS ever built, after the fall of the Time Lords), can bypass conventional durability in a variety of ways | Solar System level (Roughly comparable to Gallifreyan TARDISes in ability. Implied to be capable of at least damaging The Master's TARDIS, a small fleet of time machines would have eventually destroyed The Doctor's TARDIS with their Temporal Disruptors)

Durability: Building level+ (Capable of withstanding lightning. The Doctor was confident they could shrug off an Anti-Tank missile, although a hit at a weak point destroyed one's head. A group of prototype Daleks were able to easily tank explosives from the Thals and primed explosives from Davros) | At least City level with Shielding (A Time War Dalek's forcefield can tank nuclear bombs[4]) | Planet level for Pre-Time War Ships, Solar System level, possibly far higher for Time War Ships (A Dalek Stealth Ship tanked an attack from a Battle TARDIS), higher with Preparation (Surrounded the Dalek Asylum with a Shield they described as unbreachable, even with all the weapons at the disposal of the entire Dalek forces) | High Complex Multiverse level (Stole the technology to create 10-D Transduction barriers)

Stamina: High, a Dalek can endure crashing into earth and being tortured and experimented on for days on end

By the end of the Time War, the Daleks had stolen almost all Time Lord technology and were virtually indistinguishable with the Time Lords technologically, meaning they would likely have:

Power Source: Mastered static electricity, using it to move within their city, which is powered by a nuclear reactor. Time destructors and Dalek time machines are powered by taranium, with a mere gram of the substance — an amount that takes decades to collect — fueling the vessel for centuries. Recreated the Eye of Harmony, and used its harmonic energy to power their fleet. The Dalek Seventh Fleet is powered by the energised core of Galacton. The Crucible and the Reality Bomb it houses are powered by a core comprised of Z-Neutrinos.

Industrial Capacity: During the Time War, the Daleks were consistently noted to outnumber Gallifrey in both numbers and ships, producing both at a far higher rate than they ever could.

Military Prowess: Possessed a fleet 10 million saucers during the final day of the Time War; an average fleet contains 12 thousand ships. Their war with Time Lords shatter dimensions, burned histories and converted time itself into a weapon. The Dalek Pathweb, a hive-mind that not even The Doctor can hack, eclipses the Matrix in its sheer quantity of information and was candidate for the Quantum Archangel, who required a super computer powerful enough to "realise" the thoughts of 7 billion people and create a new dimension for each one, can mass-delete sections of information from the minds of all Dalek drones. The Daleks are excellent strategists, fronting their own resistance to draw out opposition, blockading areas of subspace to prevent humans from traveling outside the solar system, and bombarding planets with viruses to systematically eliminate entire populations.

Weaknesses: Daleks formerly required static electricity to move, were vulnerable to strong magnetic fields, could not move up stairs due to their inability to fly, and were helpless when their vision was obscured. Concentrated fire on a Dalek's eyestalk can bypass their forcefield and impair their vision, lack shielding on their underside. The Daleks, with notable exceptions, lack creativity and rely entirely on logic, which often works as a disadvantage against foes like The Doctor. If the Dalek's pathweb were to be hacked, an enemy could delete or alter information across the Dalek race.

Intelligence: Supergenius as a race (Has created technology on par with the Time Lords) and per each individual (An individual drone can perform "thousand billion" calculations in a second flat, and have internal systems which let them identify weapons and lifeforms in nanoseconds), however Daleks tend to lack great creativity outside of combat which is why special groups like the Cult of Skaro, with uniquely creative Daleks, are formed.

Weaknesses: Some weapons can destroy their casing or bypass their shielding. Concentrated fire on the eyestalk can blind a Dalek's vision. With exclusion to the Cult of Skaro, they lack much creativity. They are so zealous about their species' purity that they can grow to hate their existence and become "impure" and betray their own. 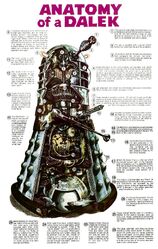 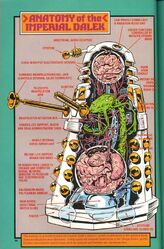