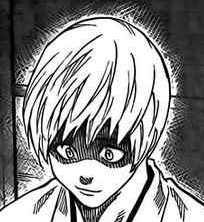 Daimaru Sakon is the youngest of the Daimaru brothers and head of the Kyosen School.

Sakon's Armor: Sakon wears plates of armor under his clothes to protect himself from slashes. The armor is strong enough to withstand one handed swing from a sword, and it takes a considerable amount of force to penetrate it.

Sakon was trained in the Kyousen Style and is capable of injuring a person's organs with his strikes. He was considered a genius at the art as he has mastered the style at a young age, perfecting it by using his legs as well.

Koshucho (Kicked Leap in the Void): A jumping technique which allows the user to accelerate midair by kicking his own heels and rushing forward, getting closer to the enemy in an instant. Sakon was able to use this technique to increase the speed of his kick.

Retrieved from "https://vsbattles.fandom.com/wiki/Daimaru_Sakon?oldid=4109691"
Community content is available under CC-BY-SA unless otherwise noted.