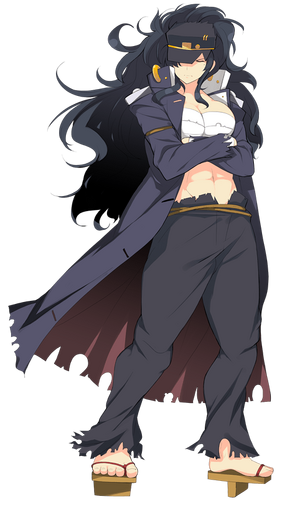 Daidouji is a character from the Senran Kagura videogame series. She makes her debut in Senran Kagura: Portrait of Girls. As a 3rd-year Hanzo student, she is one of the strongest students that Hanzo Academy has to offer.

Sometimes, she even serves as a trainer to her undergraduate peers when things get rough or she wants to push them to their limits. She shares a rivalry with the former Hanzo student and current renegade Rin.

Tier: 8-B, higher with Frantic Mode

Attack Potency: City Block level+ (Likely comparable to Crimson Homura and Ultimate Asuka. Stronger than the other Hanzo students and trained with them while holding back. She consistently fights with her rival Rin), higher with Frantic Mode

Speed: Supersonic+ (She is described as having overwhelming speed compared to other Hanzo students)

Lifting Strength: At least Class K (Should be far stronger than Naraku)

Stamina: High (Given the fact that she could handle multiple shinobi at once, she should be vastly superior to her trainees and comparable to Rin)

Range: Standard melee range with her martial arts and tens of meters with her strongest Ninja Arts

Intelligence: She should be relatively smart as a 3rd year shinobi

Weaknesses: Hotblooded, focuses more on strength than stealth or interrogation in missions. Also highly vulnerable when her clothes are completely ripped in battle.

Heaven and Earth Rumbling Spiral Leg: Daidōji takes a stance before she leaps into the air and begins to spin around while kicking wildly. Her kicks give off energy that take the shape of the claws of a tiger, pummeling any and everything in her path. She then finishes the move off with a straight upward kick.

Heaven and Earth Flash War Wild Tiger Fist: Daidōji begins to focus energy into her hands, causing them to be immersed in a golden aura. She then takes a step forward and thrusts a single palm forward, releasing a gigantic wave of energy in the shape of an open mouthed tiger. It projectiles forward at an alarming speed and pushes any and all enemies that are in its path. This move, although stationary, moves in a linear fashion. However, its trajectory can be manipulated and directed upon firing, given the chance that enemies might have slipped behind you.

Heaven and Earth Falling Hundred Million Violent Echo Fist: While in the air, Daidōji performs a series of hand signs before leaning forward and unleashing a barrage of explosive punches. She then brings her hands back and charges for one last attack; a comprised ball of energy that she soon fires down on top her enemies as it explodes at will.

Heaven and Earth Thunder God Dragon Ball Fist: The execution of this move changes greatly from its previous games. Daidōji takes a stance before she lunges forward at her foes and beats them into a corner with a barrage of punches and kicks. Once cornered, she knocks them into the air and begins to viciously punch them; increasing in speed and power as the attack progresses. Finishing the move off with a powerful punch to the ground, causing stalagmite shaped rocks to erupt from underneath.

Shinobi Transformation: A physical technique that uses the Atrribute of Yang, in where the fundamental essence of the shinobi is used as a battle tool by releasing the body's internal spiritual energy in all six chakras simultaneously.

Frantic Mode: A technique that uses the Attribute of Yin, performed by stripping off one's clothing, resulting in a considerable enhancement in speed and attack power by absorbing blood spilled within the shinobi barrier. However, it is a double-edged sword, as it also incurs a significant penalty to defense.