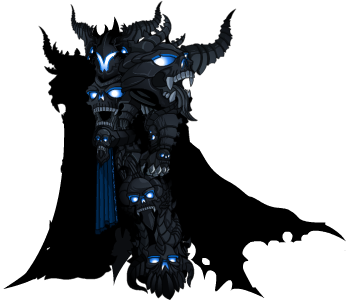 Dage the Evil is the former weaponsmith of Nulgath and the leader of the Undead Legion aligned with the Evil faction under the Shadowscythe. He holds a grudge against Nulgath the Archfiend who had taken a fraction of his soul during a contract, which resulted in his severely depowered current state. It is later revealed that Dage was formerly allied with the Queen of Monsters but currently has no connections with her as of now.

Name: Dage the Evil, The Dark Lord of the Undead Legion

Powers and Abilities: Superhuman Physical Characteristics, Magic, Immortality (Types 1, and 7), Teleportation, Weapons Mastery, Soul Manipulation, Can bind someone's spirit onto an object, Energy Manipulation, Aura, Telekinesis, Death Manipulation, Darkness Manipulation, Levitation, 4th Wall Awareness, Durability Negation (Can ignore conventional durability), likely possesses all of the Legion DoomKnight class abilities since he created the class and since he has a claim on the souls of all Legion DoomKnights, far more powerful with both halves of his soul, Spatial Manipulation and Portal Creation (Can cut through space and create wormholes between two locations), Summoning

Attack Potency: Unknown (Comparable to current Nulgath, overpowered Zeph'gorog and Future Dage. far higher with both halves of his soul)

Durability: Unknown (Comparable to Nulgath, far higher with both halves of his soul)

Stamina: Virtually limitless as an undead.

Intelligence: Genius (An extremely skilled blacksmith comparable to Yulgar and Cysero, outsmarted Nulgath and was able to escape from his control).

Dark Pulse: Dage fires a blast of energy onto his opponent.

Shadow Blast: Dage releases an aura of energy around him, creating an explosive blast and a pillar of energy that damages everything around him.

Retrieved from "https://vsbattles.fandom.com/wiki/Dage_the_Evil?oldid=5385945"
Community content is available under CC-BY-SA unless otherwise noted.