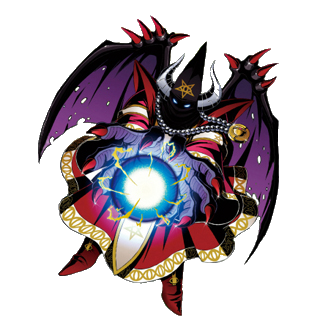 Daemon is an Evil Digimon whose name is derived from the mythological Cacodaemon and whose design is derived from the mythological Satan. It is one of the "Seven Great Demon Lords", representing Jupiter and the sin of Wrath. It leads the many Devil and Fallen Angel Digimon, and like Devimon it was originally an Angel Digimon, and a particularly high-ranking one. It is said that before it fell to the Dark Area and became a Demon Lord Digimon, it was in fact, a Seraphimon. However, because it raged in fury or rebellion, against a being of goodness in the Digital World (perhaps the very human that created the Digital World), it was deleted to the Dark Area. It has vowed to one day conquer the Digital World, in revenge against the being of goodness. Also, while it led the rebellion, and was the strongest among the Megas, it plotted to secretly revive the "Ultra Digimon". The characters on its anklet read "010", four times. 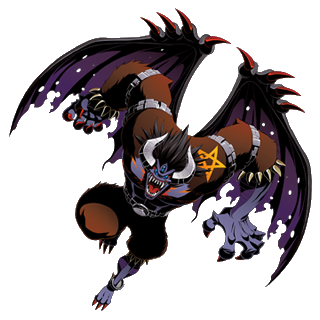 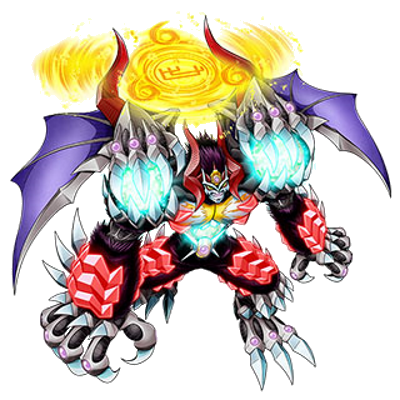 As a result of the "Crown of Wrath" manifesting over its head due to it taking in the X-Antibody, Demon's power started to increase as its anger grew. It is said that when that anger exceeds its limit, power surpassing even that of Super Ultimate Digimon bursts forth.

Superhuman Physical Characteristics, Digimon Physiology, Nonexistent Physiology (Physical. Daemon is a nonexistent being as a natural inhabitant of the Dark Area), Fire Manipulation, Hellfire Manipulation and Conceptual Erasure with Flame Inferno (The Flames of Hell/Dark Area aka El Evangelo are purifying flames that erase those who are burnt by them. This goes so far as to being able to erase even the Seven Great Demon Lords and erase one beyond death in which in Digimon death means nothingness. Whether the flames erase one beyond nothingness is dependent on whether they are evil or not. If evil, the one who is erased will be erased beyond nothingness), Empathic Manipulation (Made peaceful Digimon become violent), Size Manipulation, Immortality (Types 1, 5, 7 and 8; It was stated that as long as evil exist in the hearts of man, the Demon Lords shall be reborn), Expert Hand-to-Hand Combatant, Portal Creation | Can nullify regeneration and powers of holy or sacred origin, Regeneration and Resurrection Negation (Mid-Godly. All Demon Lords negate resurrection and rebirth, this includes coming back from non-existence), Dimensional BFR (Can banish foes to the Dark Area where they are erased into nothingness and become aspects of the Seven Great Demon Lords), Acausality (Type 1), Abstract Existence (Embodies the Sin of Wrath in which is a primal factor of the multiverse), Conceptual Manipulation, Existence Erasure, Power Nullification, Resistance to Conceptual Attacks (Resisted getting his very concept attacked by Boltboutamon), Existence Erasure and Absorption (Despite being absorbed by Arkadimon, Daemon was able to easily free himself and take over Arkadimon to become Daemon Ultra)

All Daemon abilities greatly amplified, Gravity Manipulation, Resistance to Hellfire Manipulation and Conceptual Erasure (Can resist the Flames of Hell being wrapped around it).

Intelligence: An extremely skilled and devious combatant, Daemon is one of the most powerful and dangerous Digimon in existence. As a Demon Lord he loves to prey on his foes' weaknesses and insecurities, all the while he assaults his foes with a variety of magic and with slashing attacks from his claws. However, as the Sin of Wrath, he is also a sadist to the core, enjoying the pain his opponents feel and rarely finishing a battle outright.

Weaknesses: A sadist, somewhat arrogant and prone to toying with foes he knows are below him in power