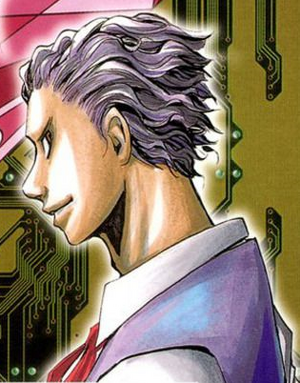 DR is the one of villains in Majin Tantei Nougami Neuro. DR is initially seen as a calm and pleasant individual when he is first introduced, but this perception is quickly shed when he becomes angry. He bears a great deal of hatred towards humanity and sees them as mere ticks with no right to live. DR is very proud as a member of the New Bloodline and sees himself above all the other members, second only to Sicks.

Powers and Abilities: Superhuman Physical Characteristics, Genius Intelligence, Can use gun as his weapon, limited Water Manipulation, limited Transformation (Can transform his hands have different shapes, such as webbed claws and swimfins)

Attack Potency: At least Large Building level, likely higher (Most of New Bloodline members have their body enhancements, which make them superior to Electronic Drug Criminals. Severity wounded Neuro when he still had a lot of demonic power in his body). Unknown Environmental Destruction with preparation (Able to form flood to make the whole Tokyo sink in water and turn it to a lake)

Speed: At least Hypersonic, possibly High Hypersonic+ (Can keep up with Neuro)

Lifting Strength: At least Class K (Should be stronger than Electronic Drug Criminals)

Stamina: Very high (Can survived from a lot of breeding after both of his hands was cut off)

Range: Standard Melee Range. Tens of meters with his handgun.

Intelligence: Genius (Was academically and athletically talented since a young age)

Retrieved from "https://vsbattles.fandom.com/wiki/DR_(Majin_Tantei_Nougami_Neuro)?oldid=5824026"
Community content is available under CC-BY-SA unless otherwise noted.