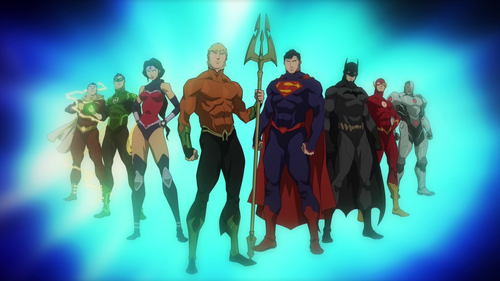 The DC Animated Movie Universe (DCAMU) is a series of animated films set in a shared universe based on The New 52 continuity. This universe was first teased in the post-credits scene of Justice League: The Flashpoint Paradox, with its events, continued in Justice League: War. These films are part of the DC Universe Animated Original Movies series but don't share the same continuity with films outside of sequels to Justice League: War and Son of Batman.

Note: The characters from Justice League: Flashpoint Paradox have only been altered in terms of character and personality, but not in terms of powers and stats.

While it is nowhere near as powerful as the original DC comics, the DCAMU is still a decently powerful verse. The verse contains a nice collection of superhuman characters with a wide range of abilities and hax powers as well. The strongest superheroes and supervillains range from Small Town level up to Moon level. In terms of speed, they have a vast collection of characters boasting of Supersonic to Massively Hypersonic+ combat speeds with characters such as the Flash and Reverse-Flash having FTL travel speed when going all out. Then there are weapons like The Mother Box, which would allow the wielder to terraform and take over entire planets as well as make Boom Tubes which would allow the wielder to travel between planets across the universe.

The verse is quite powerful in terms of technology as well. The ring of the Green Lantern can create constructs of whatever the user wills as well as know everything in the universe. The Fortress Of Solitude created androids such as Eradicator who is somewhat comparable to Superman as well as having technology which brought back the latter to life. Civilizations like the Atlanteans can create bombs which can destroy the entire planet as well as Reverse-Flash who can make bombs which can destroy an entire city. Batman has vehicles such as the Batplane which carry a 3 kiloton missiles which can cause Small Town Level explosions.

There is magic in the DCAMU which can resurrect people, seal away high dimensional beings and exorcise demons. Characters such as John Constantine makes a living from exorcising demons who try to possess and take over a human's soul or fends off Shrouds, who deliver the damned souls of the sinful dead to Hell. The Trident used by the King Of Atlantis possesses magic which can rival Shazam who possesses the magic of Zeus. The Lasso Of Truth used by Wonder Woman is completely unbreakable and can cause whoever holds it to speak the truth.

Martian Manhunter
Add a photo to this gallery

Professor Zoom
Add a photo to this gallery

Etrigan
Add a photo to this gallery