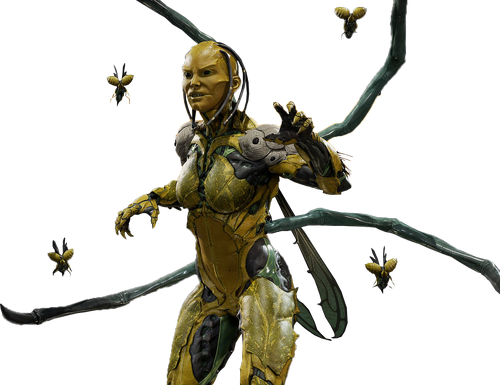 D'Vorah is a female member of the a sentient colonial race called the Kytinn. In the Arnyek Islands, she had an encounter with the emperor of Outworld Shao Kahn, and had to kneel to him in order to spare her people for slavery. After the death of the emperor, she sided with his daughter Mileena, who would be later overthrown and took over by Kotal Kahn. Despite her respect for the current emperor, she was secretly operating for decades as a spy for Quan Chi and later as Shinnok's primary enforcer.

One among many Kytinn, a swarm of sentient insects who share a hive mind. D'vorah has served Shao Kahn, Kotal Kahn, and Shinnok, but her true allegiance is to the swarm. She lies, cheats, and backstabs so that when everyone else has died, the Kytinn hive will survive.

Superhuman Physical Characteristics (Possesses superhuman strength allowing her to crush skulls, shatter metal, rip off heads, etc.), Flight (True flight), Stealth Mastery (Able to sneak inside Mileena's rebel camps), Natural Weaponry (Her ovipositors and stingers are weapons), Body Control (Has retractable appendages in her hands and back. Uses her entire body as a nest for her brood), Immortality (Type 3), Regeneration (High-Mid. Reformed from a swarm of insects after being torn in half), Healing (Can spawn insects that can heal wounds), Poison Manipulation (Her ovipositors are coated in venom. Kytinn blood is strong and highly toxic), Breath Attack (Can spit sticky substances and insects), Acid Manipulation and Corrosion Inducement (Can spray out acid), Limited Self-Destruction (Can spawn exploding insect), Insect Manipulation (Able to spawn wasps, beetles, caterpillars, etc.), Resistance to Poison (States in an intro dialogue that Kytinnians are immune to poison)