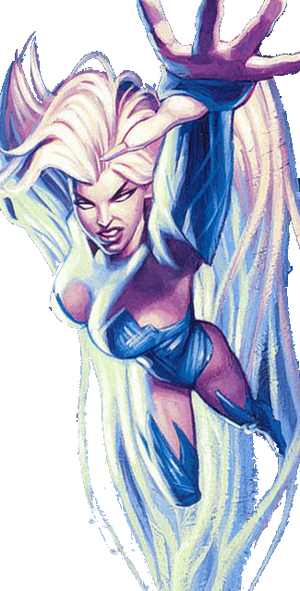 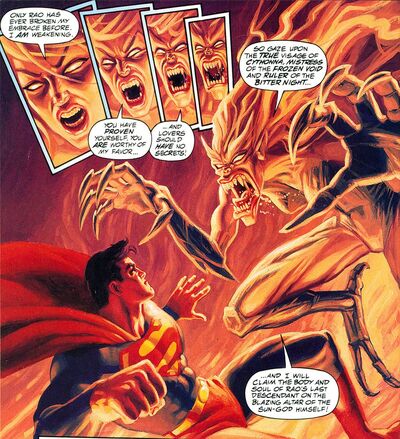 Cythonna was Krypton's goddess of ice and darkness who engaged in battle with Krypton's Sun God, Rao, eons ago before being sealed in a void as part of a last-ditch effort to defeat her. However, countless years later, she escaped her prison and discovered that she was Krypton's last remaining goddess and that Krypton itself had been destroyed. Seeking to bring Rao under her thumb in some shape or form, she attempted to force Superman to be her slave and toy, easily overcoming him in every contest of physical might and use of ice and wind. She was only defeated after the Man of Steel lured her into Earth's Sun, upon which the light and heat the star emitted managed to weaken her to a point that a newly rejuvenated Superman could push her into the sun's core, where its gravitational energy prevented her from breaking free. There she remains, cursing the last descendant of Rao for eternity.

Age: Older than Krypton itself

Attack Potency: Solar System level (Nearly rendered Superman unconscious with a single casual backhand, Superman said that she was far beyond the three alternate universe Kryptonians that he was forced to execute. Remained slightly stronger than Superman at his peak even while greatly weakened by the Sun's energies)

Durability: Solar System level (Far above any normal Kryptonian, shrugged off blows from Superman even while severely weakened)

Intelligence: Older than Krypton itself, Cythonna is an ancient and powerful being with countless years of combat experience, easily matching the Sun God Rao and his descendant, Superman, neither of whom could defeat her outright despite extensively utilizing her weakness to solar energy. However, with her great power came incredible arrogance, allowing the Man of Steel to trap her inside the Sun's core.

Weaknesses: She is greatly weakened by the presence of intense solar energy and heat, She cannot escape a star's gravitational pull when weakened in this way, She is incredibly self-assured and arrogant.