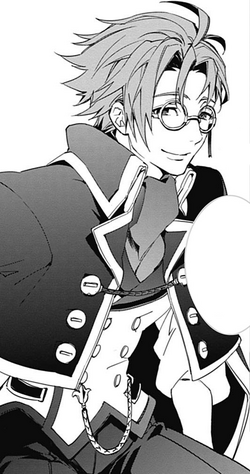 Professor Cypher Albar was a lecturer at the Military Academy and a genius alchemist. He spent most of the year in his laboratory and seldom showed himself. Underneath his calm manner, he was a deranged and twisted man obsessed with the finding of the Red Grimoire and serves as the true main antagonist of BlazBlue: Remix Heart.

Superhuman Physical Characteristics, Alchemy and Ars Magus User, Weapon Mastery, Telepathy (Telepathically talked with Mai), Energy Projection, Sleep Manipulation (Put Jin to sleep with touch), Creation and Information Analysis (Can create lifeforms that let him scan people), Body Puppetry (Can control body of other lifeforms, even if they are unconscious), Pain Manipulation and Status Effect Inducement (Can create extreme pain, making them unable to move), Forcefield Creation and Absorption (Can create barriers that absorbs attacks and energy), Glyph Creation and Flight (Can use glyphs to fly), Weapon Creation, Earth Manipulation (Can change shapes of earth at will), Non-Physical Interaction (Ars Magus can hit beings made out of seithr), Telekinesis and Transmutation (Can transmutate objects to blades and fire them telekinetically), Teleportation and BFR (Can teleport himself and others), Regeneration Negation (Up to High-Godly; is able to utilize Ars Magus, a weapon capable of killing the Black Beast, a creature that has the ability of Self Observation, which is what Terumi used to regenerate from Hakumen's Time Killer), Magic, Soul Manipulation, Healing Negation and Electricity Manipulation with incomplete Burning Red (while unfinished, Burning Red is capable of damaging the soul, negating any form of recovery, even when the reality is warped by multiversal entity,)

Stamina: Very high. Was able to fight after being mortally injured and exploded.

Range: Hundreds of kilometers (Able to reach the entirety of Torifune)

Intelligence: Extremely High. Is able to create a plan to create Burning Red and was part of Sector Seven.

Weaknesses: Condescending and quite cocky sometimes.

Retrieved from "https://vsbattles.fandom.com/wiki/Cypher_Albar?oldid=5882681"
Community content is available under CC-BY-SA unless otherwise noted.