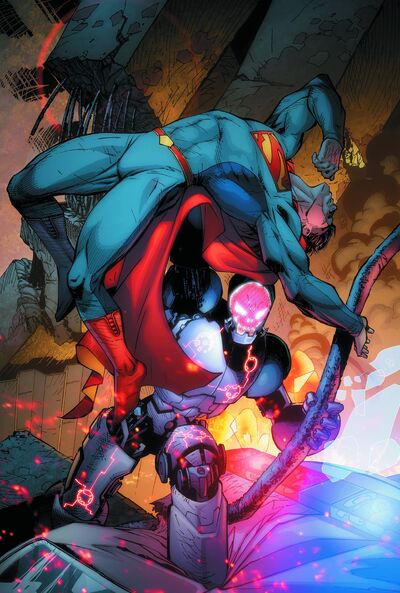 Hank Henshaw was a Nasa pilot, who flew the LexCorp shuttle which pulled the Guardian orbital defense system. His flight was sabotaged by Lex Luthor, which caused him to be paralyzed by radiation after he was unable to be saved by Superman. His paralysis left him with a vendetta against Superman, who he tried to kill and was defeated by after he was transferred into a robot. Eventually, he turned good again and helped Superboy and Supergirl defeat Eclipso. He took the Eclipso diamond into space, where he would guard it forever, to stop its evil from spreading to humanity again.

Powers and Abilities: Superhuman Physical Characteristics, Technology Manipulation (can connect with technology and manipulate it), Energy Manipulation, Flight, Immortality (Type 1), and Possession (can transfer his mind into other robots)

Attack Potency: At least Continent level (Fought and damaged Eclipso, who was able to fight Supergirl and Superboy)

Speed: Massively FTL+ flight speed and combat speed (Can keep up with Supergirl)

Intelligence: Above Average (Is a highly skilled and capable pilot)

Retrieved from "https://vsbattles.fandom.com/wiki/Cyborg_Superman_(Smallville)?oldid=5935086"
Community content is available under CC-BY-SA unless otherwise noted.