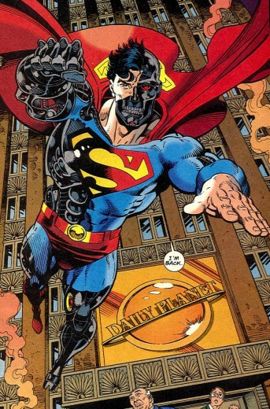 While aboard the LexCorp space shuttle Excalibur, Henry "Hank" Henshaw, his wife Terri and the other members Steven and Jim were exposed to cosmic radiation that caused their ship to crash. Despite this, Henry and his wife suffered no ill-effects at first (aside from Hank's hair becoming white) so they traveled to Metropolis in order to use LexCorp facilities to heal the rest of the crew. However, when Steven (now a being of pure cosmic radiation) committed suicide during a battle with Superman, Hank's body began to decay and Terri began warping into an alternate dimension. Though Superman successfully aided Hank in saving Terri, Hank seemingly died shortly afterward.

But Hank had not truly died. After transferring his consciousness to LexCorp's mainframe, Hank gained the power to control technology and appeared to his wife in a robotic body. The shock of Hank's unexpected return drove Terri to insanity and later her death. Henry then beamed his mind into Superman's birthing matrix and used it to create a spacecraft so he could leave Earth. Over time, Henry traveled to other planets and became paranoid and delusional. Now believing that Superman had caused the deaths of him and his wife, Henry later returned to Earth for revenge under the title of Cyborg Superman.

Powers and Abilities: Superhuman Physical Characteristics, Flight, Enhanced Senses, Genius Level Intellect, Invulnerability, Energy Projection, Technology Manipulation, Shapeshifting, Immortality (Type 6), Mind Control via nanobots, Non-Corporeal, Absorption, Has all of the abilities of Superman due to having his DNA, High Resistance to Magic (Not even magic from the likes of Doctor Fate and Zatanna can affect him)

Intelligence: Genius (With the largest database ever assembled, Henshaw has shown enhanced intelligence and computational abilities. In his wanderings by the universe, he accumulated knowledge of various civilizations. His mind works sharply with extreme speed and his analytic powers are impressive, allowing him to use his senses to read the information directly from machines and even reprogram them with careful usage of his heat vision.)

Weaknesses: Hank suffers from mental instability and he still possesses the same weaknesses as Superman, such as Kryptonite and magic.