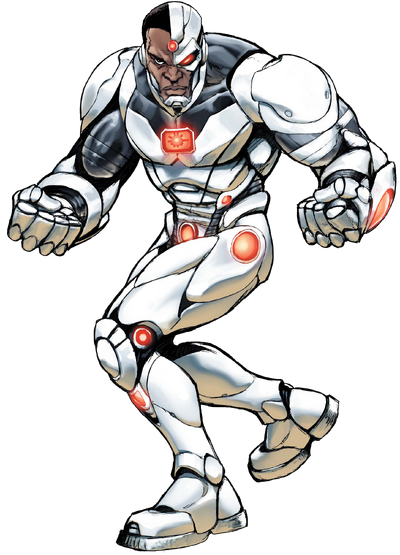 Cyborg, also known as Victor Stone, is a superhero who is half-man and half-machine. In the Post-Flashpoint timeline (Prime Earth), Victor's body was destroyed during the Invasion of Darkseid, which resulted in his father, Silas Stone, fusing his son's burned body with experimental and trans-dimensional technology. Many of his body parts have been replaced with a large arsenal of high-tech gadgets and weaponry that constantly provide him with life support. Stone struggles with his humanity as a machine, though his advancements have allowed him to become a valuable asset and leading member of the Justice League. Cyborg was created by Marv Wolfman and George Pérez, first appearing in DC Comics Presents #26 (1980).

Powers and Abilities: Superhuman Physical Characteristics, Flight, Weapon Creation, Technopathy (He is connected to every single computer system on Earth, is capable of assimilating new terrestrial, extraterrestrial, or inter-dimensional technology with a touch or thought, and has assimilated Kryptonian technology as well as the Motherbox Technology of the New Gods that is connected through a series of portals and allows him to see into other worlds), Hacking (Can hack into and communicate through any technological device with a thought, even Lantern Power Rings. Connected to the Grid, a system on databases relating to nearly every superhuman on Earth. Took control over the Digital Universe and can analyze the entire Internet at once, including all of the Dark Net / Deep Web), Shape-Reconfiguration (Capable of altering his Cybernetic Body at will to fulfill a variety of functions. After evolving, can turn any organic part of his body into machinery and also stretch his body beyond its limits), Energy Manipulation / Projection, Energy Absorption (Can tap into and absorb energy from any technology and power source he is connected to), Force Fields, Ice Manipulation / Projection (Ice Cannon), Electricity / Lightning Manipulation (Electric Cannon), Sound Manipulation (Can even affect Souls using White Noise Cannon), Regeneration (High, can reform destroyed limbs and create new organic body-parts from machinery as well as regenerate from practically nothing, capable of regenerating the nanites that make up his core structure), Tech-Based Healing (Hacked into the Technosapiens' systems and used his Regenerating Protocols to cure everyone on Earth who had been infected with their Cyber-Virus), Teleportation (through Boom Tube technology and others silent enough that even Superman cannot hear them), Self-Sustenance (Can survive in space, abyssal waters, and without food or sleep), Enhanced Sight / Scanning, Superhuman Hearing (Can listen to specific sounds miles away from his location)

Attack Potency: Solar System level (Made Shazam bleed and is capable of blasting away and hurting Mammoth, who can hold his own against Aquaman and Superman)

Intelligence: Extraordinary Genius (Capable of processing information in nanoseconds. Connected to all technology on Earth, and constantly processes immeasurable amounts of information from all said technology. Capable of simultaneously scanning / navigating the entirety of the internet for information. Can instantly scan and learn all available information on someone based on facial recognition. Creates and incorporates new technology for his own body to use for various circumstances)