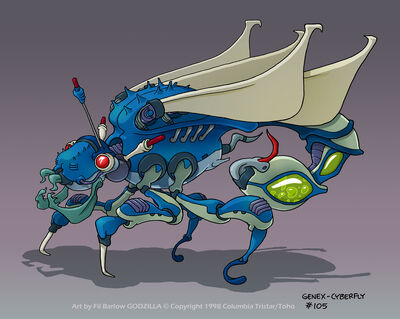 "The Cyber Flies (サイバネティックフライングアタックドローン lit. Cybernetic Flying Attack Drone) are robotic fly drones created by TriStar Pictures that first appeared in the 1998 Godzilla: The Series episode, The Winter of Our Discontent.

After Cameron Winter used a recording to lure Godzilla into a trap, the Cyber Flies were used to subdue him and discreetly place a neurotransmitter on his body. The transmitter then caused Godzilla to obey Winter's commands to destroy his base. The Cyber Flies were later hacked at the end of the episode by Randy Hernandez in order to disable the transmitter, and their creator was arrested..

Attack Potency: At least Wall level (Said to be capable of killing humans with ease, can hurt Godzilla's vulnerable points)

Lifting Strength: At Least Superhuman by virtue of sheer size.