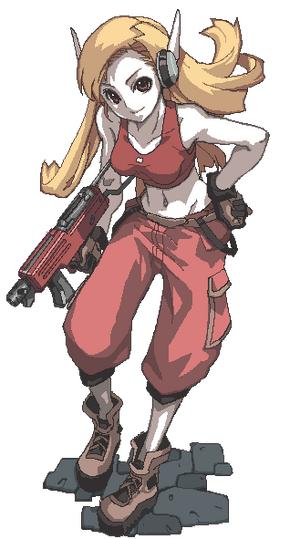 Curly Brace is the deuteragonist of Cave Story. She was sent to the island along with Quote to destroy the Demon Crown ten years prior to the game. After suffering defeat at the hands of it's current wearer, she fell into unconsciousness for an unspecified amount of time. Upon waking up, she has no memory of any previous events. After meeting and confronting Quote, she assists him on his journey.

Attack Potency: Small City level+ (Is the same kind of robot as Quote, also capable of fighting him)

Speed: Massively Hypersonic (Should be comparable to Quote)

Lifting Strength: At least Class 10+ (should be comparable to Quote)

Durability: Small City level+ (Took hits from Quote in their battle, was capable of fighting alongside him against Ballos)

Stamina: Very high, she is able to fight for long periods of time without tiring. Even after being damaged by a robot, she was capable of waking up and fight with Quote against The Core

Intelligence: High, even after losing her memory, she was able to take care of the Colons. Can fight alongside Quote against many monsters and Ballos. Is capable of deducing aspects of the area and enemies by inspecting them