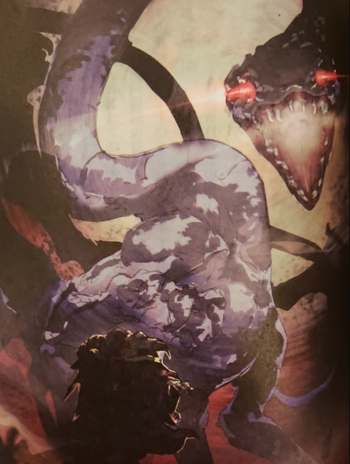 Cure Elim Los Malvar, also known as the Elder Coffin Dragon Lord, is one of the most powerful Dragon Lords in the New World. He is capable of using both Wild Magic and Tiered Magic, something that is generally thought to be impossible.

His real body has the appearance of a gigantic albino reptile with a long neck, the head of a snake, six legs, bat-like wings, and a long tail. However, he conceals himself within his armored form, using hundreds of thousands of zombies to cover his whole body for offensive and defensive purposes.

He appeared in the Overlord Bonus Volume, where he died fighting against Suzuki Satoru, but his true whereabouts are currently unknown in the main timeline.

Powers and Abilities: Superhuman Physical Characteristics, Enhanced Senses, Immortality (Types 1 and 7), Large Size (Type 2 in his armored form, at least Type 0 without it), Self-Sustenance (Types 1, 2 and 3), Statistics Amplification, Fire Manipulation, Tiered Magic, Wild Magic, Non-Physical Interaction (Can cause damage to Non-Corporeal targets), Necromancy, Teleportation Negation (Can lock opponent's teleportation in a wide-range area), Body Control (Was able to widen his jaws to increase his breath's area of effect), Undead Manipulation (Is able to precisely control any of his zombies, or even many at once), Soul Manipulation (Can absorb souls on the scale of at least 5,000,000 people with Wild Magic, and destroy them with Soulbreaker Breath), Existence Erasure (Soulbreaker Breath is comparable to World-class Item Longinus and completely annihilates the target in body and soul), Monetary Value Discernment, Flight, Resistance to Magic, Time Manipulation, Sleep Manipulation, Poison Manipulation, Status Effect Inducement (Blindness and Deafness), Disease Manipulation, Resistance Negation, Death Manipulation (Even Ainz's TGOALID cannot negate his resistance to it), Soul Manipulation, Mind Manipulation, Ice Manipulation, Paralysis Inducement, Physical Impediment, Energy Drain and Undead Manipulation

Attack Potency: City level (Is able to harm Suzuki Satoru with his attacks). Can ignore conventional durability with his Soul Absorption and Soulbreaker Breath.

Speed: Supersonic+ (Can keep up with Suzuki Satoru)

Striking Strength: City Class (Could have quickly defeated Suzuki Satoru if he caught him up close)

Stamina: As an undead, cannot get physically tired. However, his Wild Magic spells consume the souls he has absorbed, and those can run out over time.

Standard Equipment: More than 1,200,000 zombies, most being human, but some being dragons, giants and beasts. He wears them all as an armor that covers his whole body, and can use them to sprout arms and tentacles to attack enemies, and even drag them into the huge mass of corpses to be crushed and ripped apart. However, Cure Elim's defenses do not apply to the controlled zombies. Technically speaking, they are not his equipment, but more like dominated undead clinging to his body.

Intelligence: Average. Due to his arrogance, he was easily tricked by Satoru's schemes, and completely unable to counter his plans. His pride makes him act irrationally.

Weaknesses: The souls he has absorbed function like mana to him, and he must destroy them in order to cast spells. Since the souls cannot be brought back after being destroyed, they will run out over time, meaning that he can only use his trump card, Soulbreaker Breath, three times before running out of souls. If his souls do run out, he'll lose his consciousness and turn into a mindless undead. His trump card also doesn't work on World-Class Item users. Like most dragons, he is extremely arrogant and inclined to underestimate his opponents. Fire and Holy attacks deal extra damage to him. He does not keep his sight-enhancing abilities when seeing through a zombie slave's eyes. In addition, due to hating the encroachment of Tiered magic upon the world, Cure Elim will not use his Tiered magic except as a last resort.