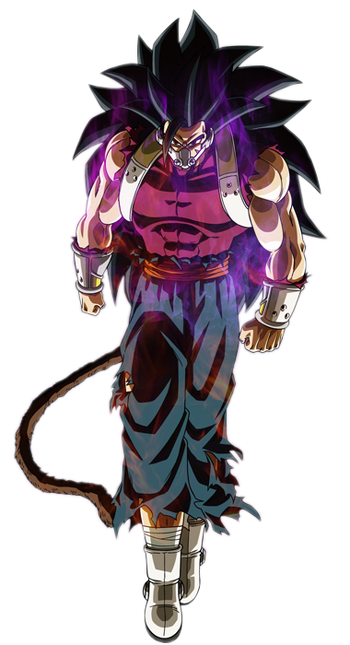 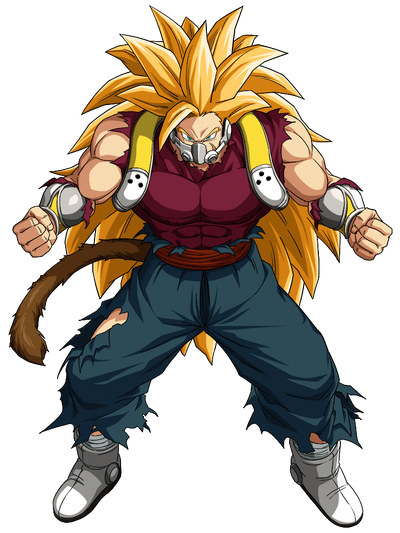 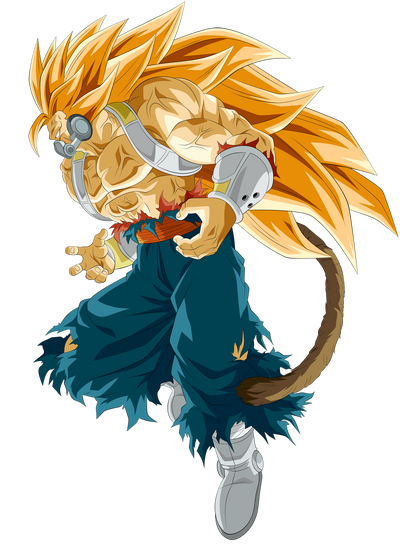 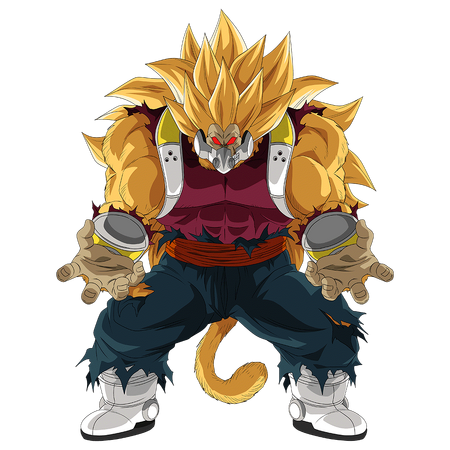 Cumber is one the primary antagonists of Super Dragon Ball Heroes: Universe Mission. An evil Saiyan imprisoned on the Prison Planet by Fu, he's the main threat to the Dragon Team over the course of the story. He's implied to be one of the evil Saiyans who fought against the original Super Saiyan God.

Age: Unknown (Implied to have fought the original Super Saiyan God, who lived centuries ago, but given Fu's status as a time traveler, it is unknown if he actually lived all that time)

Powers and Abilities: Superhuman Physical Characteristics, Acrobatics, Accelerated Development (Training; Physical Stats, Abilities), Ki Manipulation (Can be used defensively and offensively, to strengthen his skin or to fire ki blasts, which can home in on targets, and form defensive barriers; Can reshape his Aura into claws), Flight, Spaceflight, Skilled Martial Artist, Ki Sensing (Can locate others by reading their ki), Self-Sustenance (Type 1), Afterimage Creation, Transformation (Into Super Saiyan, Super Saiyan 3 and Golden Oozaru), Rage Power, Enhanced Senses (Saiyans have exceptional senses, allowing him to locate small, distant objects by tracking their smell, see clearly over long distances, and track the movements of others even in pitch black conditions by feeling vibrations in the air), Reactive Power Level (As a Saiyan, Cumber grows stronger every time he fights and can become stronger in the midst of combat, vastly increasing in strength whenever he is mortally injured), Possibly Sound Manipulation and Portal Creation (Characters equal or stronger than Super Buu and Super Saiyan 3 Gotenks should be able to perform the Vice Shout through sheer power), Corruption (Can turn people who touch him into evil rampaging and animalistic warriors, being able to affect even pure hearts like Son Goku's), Large Size (Type 1), Breath Attack, and Fire Breath as a Golden Oozaru, Resistance to Extreme Cold and Cosmic Radiations

Stamina: Very high (Never shown tired during his fights and appears to be capable of using Super Saiyan 3 for extended periods of time without any issues)

Range: Standard melee range, Interplanetary with shockwaves (Shook the Prison Planet, which is made up of many planets and even a star), Multiversal with ki blasts and attacks.

Intelligence: Cumber is an expert martial artist capable of fighting against veteran warriors like Son Goku.

Standard Equipment: Wore a straightjacket early on, but discarded it afterwards.

Notable Attacks/Techniques: Ki: The fighting power and life force of a martial artist, a tangible energy derived from the user's vigor, courage, and mind. It can be used in a number of ways, such as to surpass the limits of one's body to greatly increase in strength, and it can be fired as blasts of energy or used to create defensive barriers. Along with his Saiyan blood, Ki acts as the source of Cumber's incredible power and abilities. He shows great control over it, being able to turn his aura into claws that attack his opponent when he wore his straightjacket.

Saiyan Physiology: The physiology of a Saiyan, an aggressive warrior race of conquerors. Saiyans have the natural ability to control ki and to fly. While his lifespan is comparable to that of a human, Cumber will remain at his peak strength for much longer. One of the most powerful abilities of a Saiyan is their ability to grow stronger and stronger through combat, allowing Cumber to constantly push his own limits during a fight and rise to higher and higher peaks in power. This ability grants a substantial boost in power when Vegeta is badly injured, allowing him to reach a whole new level of power once he recovers.

Cumber with his straightjacket 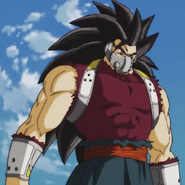 Cumber without his straightjacket 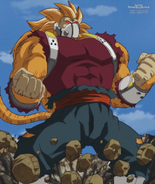 Cumber as a Golden Oozaru

Cumber as a Super Saiyan 3