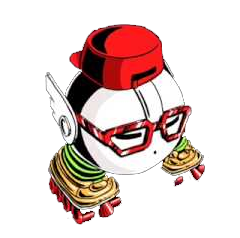 Cube, initially named 'Rover' by his creator, Kato, is one of the eight main playable characters in the game, and the lead protagonist in the future chapter, Mechanical Heart. He is created as a successful robot companion to Kato aboard the civilian cargo spaceship, Cogito Ergosum. As the spaceship begins to malfunction, Cube watches as, one by one, his crew mates are killed. He has to protect his newfound friends by overriding the corrupted mother computer that had gained sentience and began to control the ship. Later, he is taken to Lucretia and is one of the heroes that aids in the battle against Oersted.

Gender: Genderless (Referred to as a male)

Attack Potency: Likely Athlete level (Should be comparable to its durability. Cube's spin drive has it jump several meters in the air to land on its opponent, and it is unharmed by this. Can destroy machinery about half its size) | At least Town level (Fought against Pure Odio along with three other heroes, who shook a mountain simply by powering up. Far superior to random enemies that can cause damaging earthquakes, which requires at least Magnitude 6)

Speed: Normal Human (Comparable to his crew mates) with far higher attack speed | At least Relavistic (Can tag Odio, who can dodge light-based attacks at point blank) with Speed of Light attack speed (Can utilise data and light based attacks)

Lifting Strength: Unknown | At least Class 10 (Its Stone Cannon can fire a decently sized rock at the opponent)

Intelligence: Genius (Cube is a supercomputer with a photographic memory, has a base IQ stat of 99, and was considered to be far more intelligent than every other hero. Kept up with the other heroes in terms of skill)

Weaknesses: Cube has no way of communicating aside from robotic beeps (yet can understand English perfectly)

Start a Discussion Discussions about Cube (Live a Live)