For detailed information about this series, visit The H.P. Lovecraft Wiki. 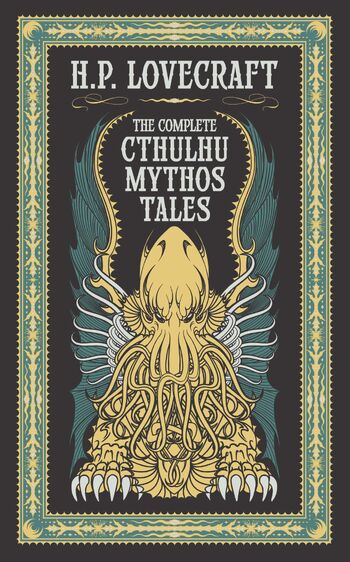 The Cthulhu Mythos encompasses the shared elements, characters, settings, and themes found in the works of H.P. Lovecraft and associated horror fiction writers. Together, they form the mythos that authors writing in the Lovecraftian milieu have used — and continue to use — to craft their stories. The term itself was coined by the writer August Derleth. Although this legendarium is sometimes called the Lovecraft Mythos, most notably by the Lovecraft scholar S.T. Joshi, it has long since moved beyond Lovecraft's original conception.

The Mythos' central theme is that the human world and our role in it are both illusions. Humanity exists inside a fragile bubble of perspective, oblivious of what lies beyond the curtains, or even of the curtains themselves, and our seeming dominion over the world is illusory and ephemeral. We are fortunate in that we are unaware of what lurks in the dark corners of the Earth and beyond. As Lovecraft famously begins his short story, The Call of Cthulhu, "The most merciful thing in the world, I think, is the inability of the human mind to correlate all its contents."

Please note that everything that is not made by H. P. Lovecraft or his close friends during his life is considered non-canon for this wiki, even though the Cthulhu Mythos is now public domain. Profiles on this wiki use only the primary canon as opposed to the expanded Mythos, and will primarily use the works of Lovecraft himself, along with occasional contributions to the Mythos from close friends, such as Frank Belknap Long and Clark Ashton Smith.

The Cthulhu Mythos is a particularly powerful verse and is widely regarded as one of the strongest verses in fiction. At the very bottom, there are creatures capable of effortlessly crossing interstellar distances and traveling across universes, entities capable of deeply influencing the mind and driving others to go insane just by seeing them. The scale continues to expand with each story, and may even transcend concepts of space-time and angled space.

As one progress further into the cosmology, there are the Ultimate Gods, a group of transcendental High 1-A entities that transcend the multiverse and totality as a whole, perceiving everything as an infinitesimal atom within the Ultimate Void. Even the Ultimate Gods, however, are reduced forms of their true formless essence in their Tier 0 Archetypes, which are themselves contained by the Supreme Archetype, an all-encompassing focal point that holds all things in existence and beyond as facets of itself.

For more information on the cosmology, here is the explanation page.