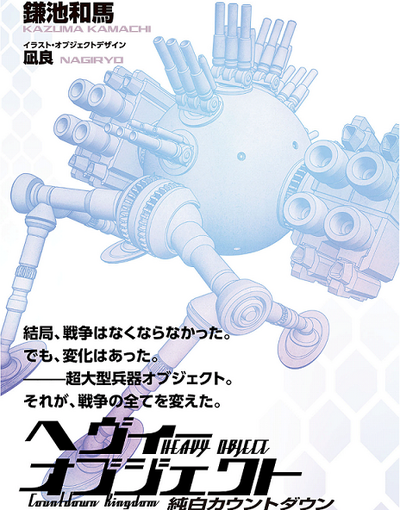 Crystal Scrying is a 2nd Generation Legitimacy Kingdom Object and the Object of the 21st Mobile Maintenance Battalion.

Tier: 7-B with main weapons, 8-B with secondary weapons

Range: Over 20km with secondary weapons, higher with main weapons

Weaknesses: Its main cannons likely can no longer achieve city level attack potency after 10 kilometers, its electrostatic propulsion device can be temporarily disrupted by a powerful electrical discharge, lacks the same resistance to heat as Objects with proper onion armor, if its glass armor melts and reforms it can form a giant capacitor that can explode and disable it

Railguns: The Crystal Scrying's main weapons are eight large railguns, placed in two groups of four on each side of its main body. The shells of the railguns are tethered to the Object's cannon by fiber optic cables and wires, allowing it to correct their course mid-air by manually adjusting the shell's tail fins. Its shots can thus curve mid-air to attack simultaneously from the left and right. Its Elite shows their monstrous skill by being capable of adjusting the path of the hypersonic shells manually when they only have a fraction of a second to think between the launch and the hit, using a split second to manage image reconstruction on a higher level than a police drive recorder analysis that requires the full use of a supercomputer and AI.

Sensors: As part of its specialization for mountainous areas the Crystal Scrying' sensors are specialized in light due to the unreliability of radar in the mountains and the noise of its main cannons making it unable to use microphones. The Object is capable of detecting infantry by the shine of a muzzle flash, IR or night vision, a pilot light or backlight even in the middle of a forest. However, this capability cannot be used in conjunction with night vision.

Glass Armor: Unlike regular Objects the Crystal Scrying is primarily made out of glass, constructing its armor by taking reinforced glass and protective film and repeatedly layering it. Unlike onion armor, the glass armor doesn't use the usual temperature-resistant reactive material, so it's more vulnerable to heat-based weapons. Melting the glass armor's surface and changing it by mixing an impurity before it reforms could affect its joints and prevent it from moving as it wants to. Additionally, if its glass armor is broken and has the wires transmitting power severed, the glass panels and metal leaf wiring start to function as a gigantic capacitor, building up all the power pumped in from the reactor with nowhere to escape until the armor causes a powerful explosion that can disable the Object.

Retrieved from "https://vsbattles.fandom.com/wiki/Crystal_Scrying?oldid=5455600"
Community content is available under CC-BY-SA unless otherwise noted.