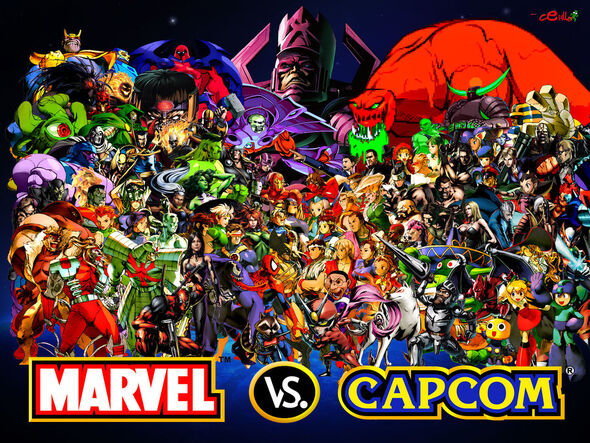 A crossover is the placement of two or more characters originating from different continuities/franchises/verses into a single story.

Non-canon crossovers do not officially take place within any of the involved continuities. Examples may include Marvel Vs Capcom, Mortal Kombat Vs DC Universe, or the Dragon Ball/One Piece/Toriko special episode. Given the multiple inconsistencies and lack of canonicity to their original source materials, using these crossovers to scale to canon or canon feats to scale to non-canon original characters is forbidden. Exceptions are that original characters may scale to their own feats or feats seen in the crossover. For example, Dark Kahn has a legitimate 2-C feat, but it does not scale to anyone but him.

Onesided crossovers officially take place within one continuity, but not the other. Given that some characters may be parodies of their original counterparts, they could potentially get a separate profile scaling from the other verse based on their importance to the story.

Profiles for crossovers not canon to the main story of one or more of the franchises involved may only be created according to the regulations defined in the Canon page.

Canon crossovers officially take place within both continuities, and as such recurrently happen within a shared universe or feature characters made by the same creators. Examples include Mario Vs Donkey Kong or Dead or Alive/Ninja Gaiden. It is canon to both franchises and feats/scaling may be used if they are consistent.

We still have to differentiate between characters of different comparative power levels within the verses, and there may be outliers and Plot-Induced Stupidity, which are rules that still apply to linear canon verses.

Additionally, the feats seen or taken from the crossover may be consistent to one verse and not the other. There could be impressive feats seen as consistent with the established scale of one franchise, but that lack consistency with the otherwise featless franchise. We should only use scaling that does not contradict the statistics of the franchises, and need to use common sense for case-by-case analysis in addition to this.

This includes considering the contexts based on the nature or portrayal of the characters. For example, while Final Fight has shown very limited feats, characters such as Mike Haggar, Cody, and Hugo are consistently comparable to various Street Fighter characters and could scale to their feats.

Take note that crossovers should preferably be referenced within the separate story settings themselves at some point in order to count as official on each side.

Take note that crossovers will almost always rescale the power levels of the different characters for the sake of writing a more entertaining story. This can happen in both in-canon crossovers such as Dissidia Final Fantasy, in which tier 6 and tier 2 characters fought on equal grounds, and in non-canon versions, such as between Luffy, Goku and Toriko. As such the character appearing in the crossover should only be considered to be as powerful as the original if that isn't beyond the degree of power reasonable for the events in the story or other participants in the crossover.

Due to the above-mentioned story conventions, characters from different fictions should very seldom scale from each other even if the crossovers are official.

Most characters within the public domain should only be considered as powerful as the originals if the crossover explicitly references their feats and nature. For example many vampire stories reference Dracula as the original vampire, without the vampires in the franchise following the same rules as those of Bram Stoker. Another common example would be the Cthulhu Mythos, for which characters appear in many franchises, sometimes even explicitly with similar background, without displaying remotely the same degree of power as the authentic versions. The same applies to mythological beings.

If a character in a crossover does not share the same history as the original, for example due to being an alternative universe version, it should not automatically be considered to possess the same degree of power.

The crossover should be reasonably extensive, meaning that just brief cameos or references to another franchise should not be used for scaling purposes.

For cross-verse scaling to be considered to be used between two separate works of fiction based on author statements, all of the following requirements must be fulfilled:

Also, these rules should not serve as an excuse to pester authors for replies via social media.