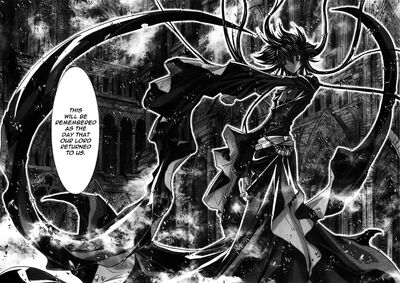 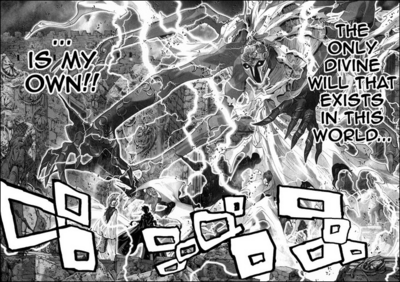 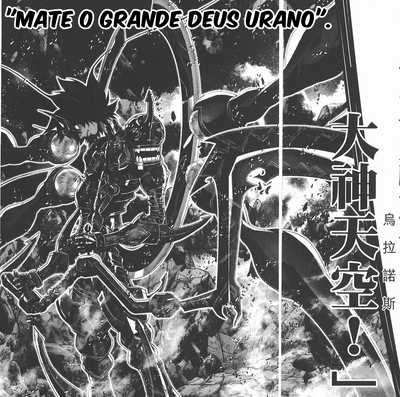 Cronus (クロノス, Kuronosu) is the leader of the Titans and the sovereign Titan Lord, with the ability to control time. He debuted in Saint Seiya: Episode G. Cronus is the youngest of the Titans and rules as their king, alongside his wife Rhea, and is the father of Zeus, Hades and Poseidon.

Name: Cronus, King of the Gods, The Mad King, Reaper of Time

Powers and Abilities: Superhuman Physical Characteristics, Abstract Existence, Immortality (Types 1, 3, 4, 6, and 8), Conceptual Manipulation, Matter Manipulation (Cosmo's basic powers are destroying objects on atomic level. While moving faster than light, one can destroy even photons themselves), Regeneration (Mid-Godly), Aura, Perception Manipulation, Sense Manipulation, Mind Manipulation, Paralysis Inducement, Life Manipulation, Statistics Reduction, and Heat Manipulation (By being in the presence of a God. The 5 basic senses, and the Mind are rendered Unusable, and denied. The Gods Radiate a divine Aura that causes fear in the surrounding beings, and forces them to obey their commands. The power that radiates from the Gods also causes the affected targets to be paralyzed. Their Life Force then starts to drain, and they then have their strength, speed, and durability reduced along with their life force by being near a gods cosmo. Powering up their cosmo causes the heat in the area around them to increase drastically, along with their attacks being imbued with intense heat), Extrasensory Perception (The Gods have additional supernatural senses such as the 6th, 7th, 8th, and 9th sense), Possession (Gods can possess select hosts and use their body), Reality Warping (Controls the primordial Chaos from which the universe and all its components were born. Holds the power of the universe's creation, and of its infinite expansion), Energy Manipulation, Time Manipulation, Spatial Manipulation, Fate Manipulation, Causality Manipulation, Acausality, Soul Manipulation, Death Manipulation, Energy Draining/Soul Draining, Durability Negation, Shapeshifting, Psychokinesis (Telepathy, Teleportation and Telekinesis), Elemental Manipulation (Fire, Water, Earth, Air), Light Manipulation, Darkness Manipulation, Enhanced Senses (By having addtional supernatural senses, and being capable of tracking events taking place in other separated realms), Resistance to Mind Manipulation, Soul Manipulation, and Time Manipulation, Existence Erasure (Can destroy beings capable of regenerating from absolutely nothing), Heat Manipulation (All Cosmo users by powering up their cosmo generates heat around them thus also being in the presence of other Cosmo users, and taking attacks from them), and Electricity Manipulation (Entry level Cosmo users can withstand 10,000 volts. While more experienced Cosmo users can withstand even more than that)

Attack Potency: Multi-Galaxy level (More powerful than the Golds Saints and the Sealed Titan. Superior to Saga) | Multiverse level+ (Immensely more powerful than the combined might of all 11 other Unsealed Titans, as well as Pontos. With nothing but a thought, while focusing most of his energy and attention in a battle with Leo Aiolia, he was capable of erasing all of Past, Present, and Future across all of existence in minutes)

Intelligence: Immensely intelligent. Capable of perceiving time 4-Dimensionally and manipulating history at a whim. Has lived for Millions, if not Billions of Years, and ruled the universe. Extremely capable fighter.

Weaknesses: Insane and psychotic. Is vulnerable to Zeus' Keraunos.

Note: The reason for Unsealed Cronus being rated as 2-A is this:

In Vols 19 and 20 of Saint Seiya Episode G, he shows that he is capable of erasing all of time in a manner of minutes.

Meaning: "I have just destroyed the Adamas Psammos which was inside the Labyrinth of Cronus. My hourglass which controls time, without it... The passing of the hours loses all control. The past and future, both of here and of Earth, are twisted... And all fall into the most terrible chaos."

Meaning: "The flames of my arms are an indicator: With each flame that is extinguished, a further shift in time occours. If you do not destroy me before they are all gone... Then everything both here and on Earth will collapse and end in ruin. And that not even Zeus will be able to avoid."

Meaning: "What happened? Get up already. Or are you going to let the flames of time be extinguished? When this flame fades, this earth will disappear. Oh, look... One's already gone."

Cronus' Unsealed Form
Add a photo to this gallery

Demiurge (11 eyes) Demiurge's Profile (Both were 2-A, and speed was equalized)