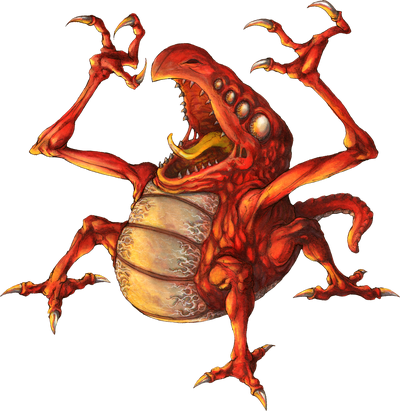 Crocomire is a miniboss in Super Metroid. It is found in Norfair on the way to finding the Grapple Beam. The Crocomire cannot be killed by conventional means. Samus' weapons, such as Missiles, Super Missiles, and the Charge Beam shot into the mouth only succeed in making the beast take several steps backward, depending on the power of the weapon.

Powers and Abilities: Superhuman Physical Characteristics, Spongy skin, Sharp claws, Can fire plasma balls from its mouth, Its skeleton can remain alive and active for several seconds after the rest of its body has been destroyed.

Attack Potency: Planet level (While it is shown to damage Samus in gameplay, most of the attacks deal pushback and may be game mechanics when considering the entire fight is pretty much a tug war)

Speed: Superhuman movement speed with Massively FTL+ attack speed (Can't actually dodge any of Samus' attacks, though it is possible it is because of lack of space, can land hits on Varia Suit Samus)

Weaknesses: Attacking Crocomire's mouth will cause it to stagger backwards. Extreme heat sources, such as magma, can quickly melt its skin off.