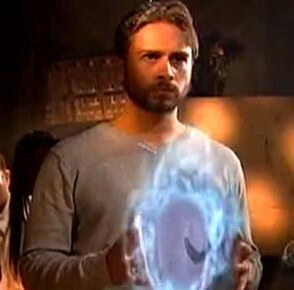 Cristiano Pena was born at the Progeny Clinic of Guarujá, but was abandoned in the maternity ward by his own mother still a few days old, because she was frightened by the powers that her son already manifested.

He was raised by Nurse Marli, who had a special affection for the boy. Because of his early aging, his powers developed very fast and when he reached a biological age of approximately 11 years, Dr. Julia sent him to the island, fearing that it would become uncontrollable on the continent. When grown up, Cris fell in love with Marli until Vlado killed her. Since then he has sworn revenge on all vampires.

Powers and Abilities: Superhuman Physical Characteristics, Acrobatics, Telekinesis, Accelerated Development (His power become stronger when he gets older), Enhanced Senses (Hearing. Able to hear people's heartbeat), Telepathy (Can read minds), Minor Automatic Translation (Can talk with animals), Air Manipulation (Can remove oxygen from someone and absorb air waves), Immortality (Type 3 and 8 - God will always bring him back after his death), Regeneration (Low-godly. Can regenerate his body as long as his soul exists), Gravity Manipulation (Can remove the gravity from somene's body), Forcefield Creation, Pain Manipulation via Mental Attacks, Creation and Transmutation (Can materialize any object he has in mind. Can also rematerialize objects), Electricity Manipulation, Life-force absorption (Can absorb peoples life energy to gets younger), Self-Age Manipulation (Can gets older to become stronger), Heat Vision, Light Manipulation, Death Manipulation (Killed a vampire only by moving his hand), Power Nullification (Neutralized Valente's telekinesis), Fire Manipulation (Via Pyrokinesis), Weather Manipulation, Paralysis Inducement (Can paralyze people by moving his hand), Durability Negation (Through many ways), Resistance to Drugs, Disease Manipulation, Mind Control (Unaffected by Gór hypnosis) and Petrification.

Attack Potency: At least Small Building level (Exploded a car with a single telekinetic wave. Physically hurts beings who can tank his telekinetic powers. Defeated the whole League of Good alone), can negate durabiity through many ways.

Speed: Superhuman (Able to run so fast as to climb ambulances in very few seconds and keep up with characters that move faster than the eyes can see) with Subsonic reactions (Dodged bullets with minimal effort).

Durability: At least Small Building level (Supported blows from Valente who can match with his own telekinetic waves)

Stamina: High (Not tired even after using his powers to hurt numerous opponents simultaneously)

Intelligence: High (Able to defeat experienced combat characters; Infiltrated the vampire's lair and was able to exterminate their leader without showing any difficulties)

Weaknesses: He always gets older as his powers evolve, but each time he gets older he gets more powerful.

Retrieved from "https://vsbattles.fandom.com/wiki/Cristiano_Pena?oldid=5946071"
Community content is available under CC-BY-SA unless otherwise noted.