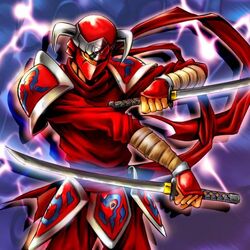 Attack Potency: Street level (Should be comparable, if not superior to the Ojamas, who can easily defeat athletic humans)

Stamina: Likely High (Should have comparable stamina to athletic humans)

Intelligence: High (Should be a master at stealth, swordplay and ninjitsu, knows spells to deal away monsters and to create illusions)

Retrieved from "https://vsbattles.fandom.com/wiki/Crimson_Ninja?oldid=4874793"
Community content is available under CC-BY-SA unless otherwise noted.