VS Battles Wiki
Register
Don't have an account?
Sign In
Advertisement
in: Tier 8, Tier 8-B, Characters,
and 24 more 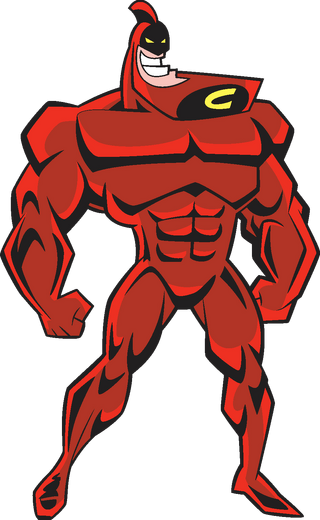 The Crimson Chin is a famous superhero and recurring character in The Fairly Oddparents!. He is a fictional comicbook character within the verse who got some levels of awareness after being wished to be brought into the "real world" by Timmy. He's well known for his enormous chin and mostly fights against villains themed after body parts in the city of Chincinnati.

Age: Unknown, possibly in his 30s

Powers and Abilities: Superhuman Physical Characteristics, Natural Weaponry (Makes use of his chin in combat), Enhanced Senses (Superhuman hearing, vision, X-Ray Vision), 4th Wall Awareness (Of his continuity, not that of The Fairly OddParents!), Plot Manipulation (Is used by the writer as he creates stories with Crimson Chin in them and believes that good should always triumph over evil. Those stories are the real adventures Chin has even in the 3-Dimensional world, with other real people getting controlled, and convenient and illogical events happening to follow of the writer's vision), Invulnerability (Implied that he never gets tired because of it, otherwise his so-called invulnerability seems to just be his own durability), Regeneration (Likely Low), Flight, Heat Vision (Shown here), Energy Projection & Light Manipulation (Shot a blast of light from his chin against the Body of Evil), minor Fire Manipulation (Shown here), Statistics Amplification (Can increase the strength of others), Elasticity (Was grabbed and dragged by his tongue as it stretched in inhuman ways), Creation (Materialized 2 suitcases with an eye beam[1]), Resistance to Radiation Manipulation (Beat up the Giant Radioactive Robot and sliced parts of its body with his chin, who was sometimes glowing with vast radiation[2]), Sound Manipulation (Flew in front of a robot that was using a scream to shatter windows from far away buildings, being unaffected by it briefly before the robot stopped doing that)

Attack Potency: City Block level (Defeated Bronze Kneecap several times, the Iron Lung, Brass Knuckles & Titanium Toenail, and harmed the Nega-Chin, all of which being known villains of him with the latter stating that they not win in their dimension; All of the former were able to take hits from Mighty Mom and Dyno Dad [43.16 Tons of TNT]. Timmy exemplified the Crimson Chin to Cosmo & Wanda when he wished his parents to have invulnerability, super strength, as well as other powers)

Speed: Massively FTL (Comparable to his enemies, who kept up with Dyno Dad and Mighty Mom, when the former flew to the surface of the sun and back in seconds [140.64 c] having counted the miles of distance in the process, and they both quickly flew circles around the Earth before discovering they gained superhuman abilities. While having lost his powers, he dodged Nega-Chin's Negavision, which Dyno Dad and Mighty Mom couldn't. Timmy exemplified the Crimson Chin to Cosmo & Wanda when he wished his parents to have super speed and other powers)

Lifting Strength: Class 10 (Lifted and carried a loaded bus. Should be comparable, if not superior to Bronze Kneecap and the Iron Lung, when the former lifted & threw a bus and the latter punted said bus away with a street light pole. When the latter 2, Brass Knuckles, Titanium Toenail and Nega-Chin were wreaking havoc on a city, vehicles were scrambled and a car was tossed away)

Stamina: Very high. While dealing with his parents having ended up exhausted after a day of work and how they're only human, Timmy came up with how the Crimson Chin "can do anything without breaking a sweat" and later wished them to have, among other abilities, "invulnerability so nothing can hurt them and they never get tired" while showcasing Crimson Chin with that power, resulting in them being able to fight against crime all day and defend truth and justice all night

Intelligence: Above Average. Is a relatively clever fighter. Has more than 934 issues in his comic[3], which should give him a large amount of experience. Considered an ace reporter in his job. Could send part of a street as a wave to make the people reached by it get precisely launched on top of a building, which he was aiming to do

Weaknesses: "Chintonite", it makes his powers no longer work