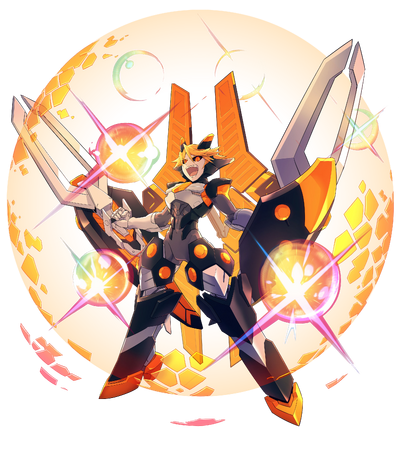 Crimm is a boss in Gunvolt Chronicals: Luminous Avenger iX. He believes the explosions he makes with his Septima, Detonation, are the greatest form of art possible. He became a member of The Falcons to create his art with no legal consequences.

Speed: Sub-Relativistic+ (Can keep up with Copen)

Striking Strength: Large Mountain Class (Can damage Copen by ramming into him)

Durability: Large Mountain level (Can take hits from Copen), Higher with his barrier (Neither Copen nor himself can damage it)

Standard Equipment: His Falcon Quill, which lets him transform into his weaponized state.

Weaknesses: Is obsessed with explosions. If his barrier is up, he can't use his explosive projectiles, though he can still attack physically (It should be noted that he's not likely to abuse this due to his obsession with explosions). Piercing attacks can destroy Crimm's claws, causing his barrier to shatter. If he doesn't have his barrier, he can't use explosions for mobility without damaging himself.

Retrieved from "https://vsbattles.fandom.com/wiki/Crimm?oldid=6129134"
Community content is available under CC-BY-SA unless otherwise noted.