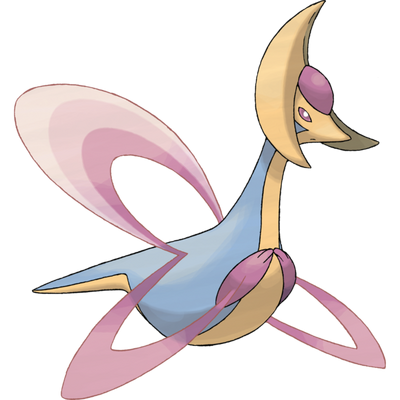 During the events of Pokémon Mystery Dungeon 2 (Pokémon Mystery Dungeon: Explorers of Time, Darkness, and Sky), Cresselia is time traveling to catch Darkrai. In the Post-game, Darkrai stops his travels and poses as Cresselia to partake in mischievous plans against the world, and to convince Palkia into killing the party later on. However, during that event, the real Cresselia teleports to the scene a split second before Darkrai is able to kill the party and saves their lives, removing Darkrai's illusion, and placing Darkrai into a state of pain. After a confrontation exposing Darkrai as a imposter, Cresselia failed to finish off Darkrai as it teleported away to the Dark Crater. Upon arrival to the Dark Crater however, Cresselia and the party defeated Darkrai.

In general, Cresselia is seen as a healer and cleric throughout the franchise, as well as the Dispeller of Darkness; opposite of Darkrai, who is the Harbinger of Darkness.

Stamina: High (Never shown signs of exhaustion during battle, can traverse the Deep Dark Crater, and can use the Blink IQ skill)

Intelligence: Very High, although not Omniscient (However, is able to detect where Darkrai is present when it's causing trouble. Able to heal any beings instantly and can dispel darkness in any form)

Weaknesses: Bug, Dark and Ghost based attacks (In the games)