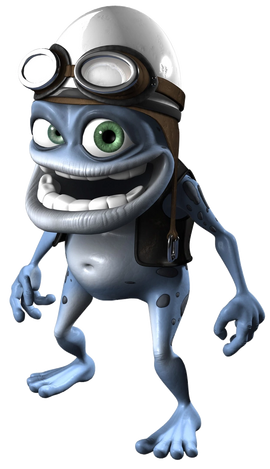 The Crazy Frog, originally known as The Annoying Thing, is a Swedish CGI-animated character created in 2003 by actor and playwright Erik Wernquist. Marketed by the ringtone provider Jamba! (Later known as Jamster), he was originally created to accompany a sound effect produced by Daniel Malmedahl in 1997 while attempting to imitate the sound of a two-stroke engine.

Tier: At least 9-A, possibly higher

Speed: Subsonic (Is able to drive up buildings, fast enough to get sent flying several streets away once he reaches the top, can reach speeds of 114 m/s or higher) Travel Speed with higher reactions (Dodged a missile)

Durability: At least Small Building level, possibly higher (Casually tanked a tank round and was unharmed by this explosion)

Range: Below standard melee range (Is quite short compared to humans)