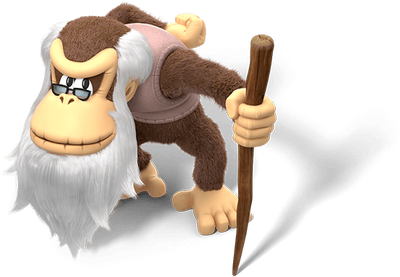 Cranky Kong is a widower and Donkey Kong's constantly complaining and rambling grandfather, who has made numerous appearances throughout the Donkey Kong series. He usually acts as a guide in the games to help his grandson Donkey Kong or his friends along their journey as he has had some enlightening experiences. In some appearances, he is indicated to be the original Donkey Kong from the arcade game, Donkey Kong and Mario's main adversary in the game prior to his retirement. Because of his claims to be the original Donkey Kong, he often looks down on his grandson and breaks the fourth wall by saying that Donkey Kong will never be as great a character as he was during his prime. Cranky is also Funky's grandfather. It should be noted that in Donkey Kong 64, Cranky claims Donkey Kong is his "son" however "son" can be short for "grandson".

Attack Potency: Building level (Collapsed a 25m structure by just jumping, could easily one-shot Mario at his beginnings) | Small Country level (Comparable to Dixie Kong and his great-grandson, who was able to knock a miniature-sized moon out of its orbit and into the planet's atmosphere with his head)

Durability: Building level (Survived a fall of 100 meters) | Small Country level (Can withstand attacks from those comparable to him)

Stamina: High (Despite his advanced age, he can easily keep up with the other characters in his games and appears to be in very good health)

Standard Equipment: Nothing | His staff and a Popgun that fires dentures

Note: Not to be confused with Donkey Kong, who is his grandson.