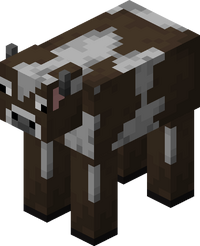 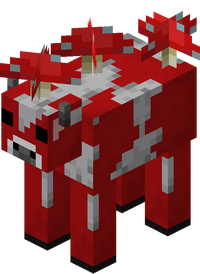 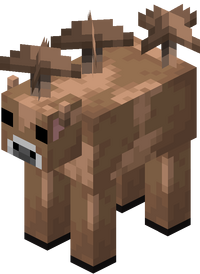 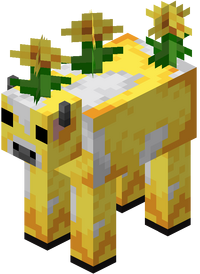 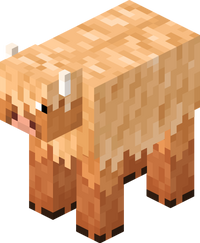 Cows are a common passive mob found within Minecraft's Overworld. They drop beef and leather upon death and can be milked by the Player with a bucket. Cows can be mounted by Baby Zombies in the Pocket Edition Alpha.

An exotic variant of the cow exists within the Mushroom Biome, known as the Mooshroom. This mob usually spawns as a Red Mooshroom, which grows red mushrooms on its back, but when struck by lightning, it becomes the Brown Mooshroom, which grows brown mushrooms. These mobs can be "milked" for Mushroom Stew by the Player with a bowl. A dandelion variant of the Mooshroom also exists within Minecraft Earth, known as the Moobloom.

Another exotic variant of the Cow, found within Minecraft Earth, is the Wooly Cow. While they cannot produce milk, they have a large amount of fur, causing them to resemble yaks.

Gender: Both (Possess both horns and udders and can both impregnate and be impregnated)