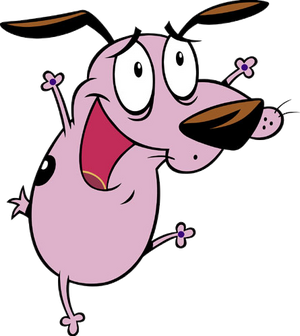 Courage is the main protagonist of the animated series, Courage the Cowardly Dog. After his parents were sent into space by a deranged vet, he was found by Muriel, who lives in the middle of nowhere, with her husband, Eustace Bagge. As creepy things show up in Nowhere, Kansas, it's up to Courage to save his new home.

Superhuman Physical Characteristics, Toon Force, Regeneration (Mid-High. Instantly reformed himself after being turned into hairspray in the episode "Human Habitrail". Can also heal from being reduced to ashes, turning into a puddle, being dismembered, exploding, and being ripped to pieces. Can liquefy himself to escape from dangerous predicaments), Immortality (Types 2 and 3. Can live without his head and his organs, could still function after being reduced to his skeleton, can remain conscious after being frozen solid; can regenerate from his injuries within a short timeframe), Preparation (Usually makes complex plans, weapons and traps within a short amount of time. Outwits his enemies regularly and is an expert at disguising himself. Can sneak into highly-guarded areas even with minimal planning and tools), Information Analysis with his computer, Social Influencing (Is a licensed therapist. Has talked a few villains out of their harmful deeds, such as The Shadow), Weapon Mastery (Highly skilled in fencing and using all sorts of weapons, such as crossbows, blow torches, baseball bats, chainsaws, etc), Soul Manipulation (seen here), Sound Manipulation via screaming (His screams are strong enough to severely injure ears, stun people, make his surroundings shake and crumble, send people underground, and destroy his house), BFR (His screams can send people underground. Grabbed a colony of frogs by their tongues, spun them around and threw them to a faraway distance), Paralysis Inducement (His screams can stun people to the point where they can't move), Fourth Wall Awareness, Self-Sustenance (Type 1. Can breathe in outer space without any gear), Stealth Mastery (Has snuck into highly-guarded areas even with little to no planning and tools, such as military bases and banks), Shapeshifting, Invisibility (Seen here), Hammerspace, Extrasensory Perception (Can see ghosts), Non-Physical Interaction (Can harm ghosts. Was capable of physically touching the Evil Shadow. Repaired the ozone layer with a needle and a thread), Mind Manipulation and Transmutation with yo-yo and pocket watch (Can make people think they're a different thing or snap them out of a hypnosis, used his yo-yo to get the entire city of Nowhere to stop eating flan; can hypnotize people and turn them into a small, weak animal. Can also use Transmutation with the ray gun), Possession (Can put his decapitated head on someone's body and take control of them. His computer can connect itself to another living being by putting its wires in the back of their head and upload its personality into their body, taking them over), Magic via The Magic Tree of Nowhere, Empathic Manipulation with Happy Plums, Sleep Manipulation, Flight, Surface Scaling (can run on walls and ceilings), Underwater Breathing (Type 3; with his scuba diving gear), Summoning (Has frequently called for assistance from Mr. Mouse; can call other dogs for help), Teleportation, Large Size (Type 2) and Transformation via Kangaroo Monster Bone Fragment (Can turn into a Kangaroo Monster, which greatly increases his size), Earth Manipulation & Sand Manipulation with Instant Quick Sand, Life Manipulation via Instant Eels, Body Control, Elasticity (Capable of stretching his limbs and tongue. Stretched his tongue to divert a train. Used his tongue as a slingshot), Extreme Pain Tolerance (One of Courage's notable traits is being able to brush off immense amounts of inhuman abuse. Laughed off highly brutal beatings from Mecha-Courage, who was designed to be superior to him in every way. Had his organs spill out from his body and was completely unfazed by it. Had his tongue popped off as a baby but didn't seem to mind it seconds later), Enhanced Senses (Smell and Hearing. He can use his sense of smell to properly find things, and he could hear a man snoring, who was far away and at the highest tower in his castle), Martial Arts (Faced the Chicken from Outer Space in a sword duel. Fought an experienced martial artist in a one-on-one fight. Beat up two trained guards), Acrobatics (Dodged Dr. Zalost's cannonballs by performing acrobatics. Can do 16 backflips) Attack Reflection (Can redirect attacks by breathing it in and out as seen here. Reflected the Evil Empress of China's glare with a mirror), Size Manipulation (Can shrink himself by putting himself in a dryer. Shrunk himself to the size of bacteria and red blood cells so he could go inside Eustace's body), Explosion Manipulation via explosives (TNT sticks and dynamite), Immersion (Can enter and travel through paintings. Can also enter cyberspace. Can travel through phone lines and pop out of telephones), Astral Projection (Seen here), Dream Manipulation via Astral Projection (Can travel into other people's dreams. Fought spirits and beings within the dream world)

Resistance to Mind Manipulation (Resisted the urge to eat Flan despite being hypnotized into wanting to eat it alongside the entire town of Nowhere, and potentially the whole planet. He also controlled his temptation to consume The God Bone, which forces dogs to lick it until they die), Extreme Heat & Radiation (Survived being inside the core of the Sun, as well as digging through the Earth's core. Reflected a dragon's fire by eating it with no ill-effects to himself and blew it back out at the dragon), Ice Manipulation (Freed himself from being frozen solid. Can thaw himself out of ice by having a lightbulb appear above his head, which makes the ice melt quickly. His tongue can melt ice) and Age Manipulation (Courage and the Bagges were the only ones unaffected after the Earth was sent 1,000 years into the future, causing everything to drastically age)

Attack Potency: Varies from City level (Him running to the sun's core generates this much energy. Created a machine that sucked the Statue of Liberty all the way to Kansas. Comparable to Robot Randy, who stomped a robot that destroyed a mountain) to Large Star level (Can physically injure Eustace Bagge, who survived an explosion that turned him into a constellation of 88 stars and a bite from The Shadow, who instantly turned into a bunch of stars. Held a star, destroyed the sun with a scream. Once destroyed the moon)

Speed: Relativistic (Ran from the surface of the Sun to its core) with Massively FTL+ reactions (Pedaled and piloted a ship that flew from the Sun to the Earth in a very short amount of time. Reacted to the Evil Shadow charging at him, who is fast enough to fly to a faraway star) and attack speed (His scream destroyed the Sun within a few seconds)

Lifting Strength: Class K (Capable of lifting a blue whale over his head. Was able to uproot a large tree and carry it on his back. Can lift Eustace’s truck over his head without any trouble. Tore a large metal door off a wall and crushed it. Effortlessly lifted up The God Bone and swung it around), at most Stellar (Held a star with his bare hands)

Durability: Varies from City level (Can withstand his own hits. Was shot across the planet, only to get back up fine without injuries in Courage vs. Mecha-Courage. Survived being inside the core of the sun in Mission to the Sun) to Large Star level (Survived going through the moon and hit back to the Earth by an alien capable of doing this. Was completely fine after crashing through several planets. Regularly trades blows with Eustace). Toon Force and regeneration makes him difficult to kill.

Stamina: Extremely high (Quickly dug through 1,000 years of dirt without stopping and wasn't exhausted afterwards. Survived many curbstomp battles that had him beaten with every inch of his life, like the ones against Mecha Courage and all of his enemies. Sat still for an entire night and until the next morning in Remembrance of Courage Past. Has endured many difficult situations such as digging to China and then digging himself back to Nowhere, running from Kansas to Tibet, to India, to Paris, and back to Kansas within a matter of seconds, and constantly being strangled)

Range: Standard melee range, hundreds of meters with weapons. Thousands of kilometers with preparation (made an invention that sucked the Statue of Liberty all the way to Kansas). Stellar with screams.

Intelligence: Gifted (Courage can speak English coherently despite being a dog, and solved most, if not all of the problems in the show within a reasonable amount of time, which normally requires outwitting clever villains, some of which are scientists capable of inventing gadgets. He is an exceedingly skilled tactican, as he has consistently quickly built contraptions and tools that help him in situations. Can also infiltrate highly-secure areas with minimal planning and tools at times. He can tell when something is bad and when something bad is about to happen. It is extremely difficult to trick him or catch him off-guard since he is always alert, and he tends to not trust strangers. He is a highly skilled cook, survivalist, tracker, repairman, puzzle solver, hypnotist, dancer and licensed therapist. Is also a talented painter, as he made a replica of the Mona Lisa within a matter of seconds. Knows how to play the piano, tuba, violin, and other musical instruments)

Standard Tactics: Although Courage is initially very easy to frighten, he will not hesitate to protect himself in a battle. Courage is very prone to leading with his equipment (including Optional Equipment if prompted), and he will try his best to stay out of range. With preparation, he will arrange necessary utensils beforehand, such as setting up an entire fort with a moat around it, building contraptions (one example being a giant industrial-sized vacuum), creating traps, and making barricades. He might also do research on his computer to gain necessary information.

Even without preparation, Courage is an on-the-fly thinker as he has reprogrammed an alien spaceship and he wired Le Quack's train to explode. He is also capable of thinking of unusual ways to escape dangerous predicaments, such as screwing his head off his body or melting himself. As stated before, it is difficult to trick him or catch him off-guard since he is always alert and has a tendency to not trust strangers. Courage also tends to use his Shapeshifting during combat, whether it be to confuse his opponent or turning into a weapon.

Weaknesses: Courage is a coward to the point of being scared of his own shadow on occasion. However, he is capable of overcoming it for the ones he loves. His critical thinking and speaking skills fall apart when in a panic, leaving him prone to screaming, running, and speaking in gibberish instead of confronting the problem directly. Tends to be selfless, as he is usually willing to save Muriel's life with little to no regard for his own well-being.

Chowder (Chowder (Verse)) Chowder's Profile (Speed was equalized. Courage was 7-B, bloodlusted, fully equipped, and had a week of prep with prior knowledge)

Announcer (Battle for Dream Island) Announcer’s Profile (Speed was equalized, both were 7-B, willing to kill, and both had all of their equipment. Announcer has an hour of prep while Courage had a week of prep along with limited prior knowledge about Announcer’s Budget Cuts.)