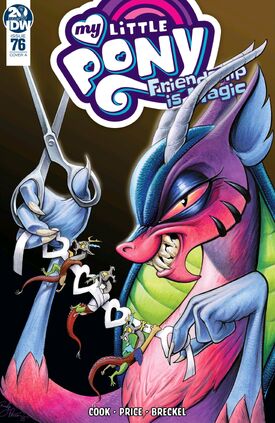 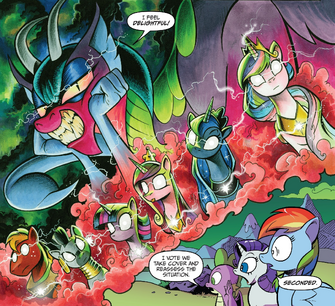 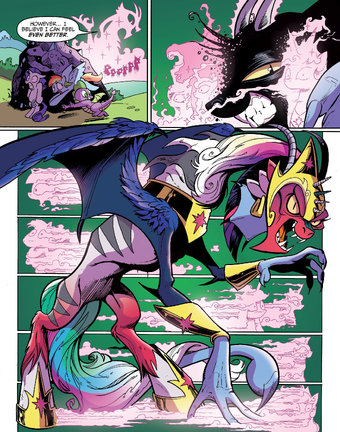 Cosmos is the villain of the story arc spanning issues 75-78 of the MLP IDW comics. She is the spirit of malice, and Discord's ex-girlfriend.

Age: Over 1000 years old (was around during Discord's reign)

Superhuman Physical Characteristics, Immortality (At least type 1), Self-Sustenance (At least types 1 and 2, can survive in space, was left on the moon at the end of the story arc without any implications she would die due to lack of food or water), Abstract Existence (Type 2, is the spirit of malice personified and even while depowered implied that she could not be destroyed because malice itself could not), Flight, Spaceflight, Magic, Reality Warping, Chaos Manipulation, Energy Projection, Natural Weaponry (Claws and horns), Transmutation (Turned an entire city into ladybugs, turned Discord into a dog, turned the ponies into inanimate objects and fish), Petrification (Turned Fluttershy to stone), Shapeshifting (Turned into this), Biological Manipulation (Altered Fluttershy's body, making her part Breezie, notably Discord could not reverse this), Size Manipulation (Can become a giant), Physics Manipulation, Fire Manipulation (Set an orphanage on fire and was shown setting other buildings on fire), Water Manipulation (During her reign with Discord, he was shown running through a puddle of water on land with a shark swimming in it while trying to get away from her, water was also seen pouring out of a tree), Earth Manipulation (Made a fist out of earth to hit Applejack), Minor Weather Manipulation (Can cause dark green clouds to form in the sky), Matter Manipulation (Altered the structure of an orphanage while setting it on fire, altered the structures of many other things), Smoke Manipulation (Pink smoke constantly follows her and usually appears when she uses magic), Darkness Manipulation (Here and here), Telekinesis, Hair Manipulation (Altered Twilight and Luna's hair with her magic while possessing them), Cloth Manipulation (Caused leotards to appear on Twilight and Luna while possessing them), Creation, Weapon Creation, Life Manipulation (Can spawn creatures, turned Capper's coat into snakes and made them attack him, can bring objects to life), Plant Manipulation (Turned a herb garden into the Everfree Forest, made vines wrap up the CMCs), Age Manipulation (De-aged Capper into a young cat), BFR (Teleported Capper, Pinkie Pie, and the CMCs to inside of a cage back in Canterlot Castle), Spatial Manipulation (Altered the layout and structure of Equestria while working with Discord, could literally tear apart the fabric of reality like it was wallpaper), Portal Creation and Dimensional Travel (Along with Discord, she traveled to different realms before choosing to conquer Equestria), Resistance to Corruption (Type 2, anyone equal or superior to Celestia in power should be able to resist corruption), Madness Manipulation (Spent a great deal of time in Discord's realm and was never driven insane by him or his realm), cold temperatures and Cosmic radiations (Lived in space, which is freezing cold and filled with radiation, before travelling to Chaosville and meeting Discord), Likely far more (Powerscaling from Discord)

Possession (Can possess those who wear her stars as necklaces, can possess up to at least 6 beings at once, gains the powers and memories of whoever she is possessing), Extrasensory Perception (Can sense the locations of her stars, demonstrated when she located the star in Canterlot Castle), Social Influencing, Fusionism (After regaining her true form, she is able to fuse all those she possessed together along with her own body, making herself even more powerful)

All of her base powers increased to further levels, Natural Weaponry (Same as before, plus she gains the horns of the four alicorn princesses), Extrasensory Perception (Should be able to locate her stars similar to before should any be removed), Avatar Creation and minor Body Control/Elasticity (Can project avatars of the heads of those she has fused into her being, form them from her fingertips while stretching said fingertips out, and fire them from her mouth to attack others), Possibly Genius Intelligence (Due to likely retaining the knowledge and memories of all those she possessed and fused with her, including Twilight Sparkle)

Attack Potency: Universe level+ (More powerful than Discord, who was afraid of her, was stated to be capable of ripping apart the fabric of reality, it was stated by Discord that he, Celestia, Luna, Queen Novo, King Aspen, and the king of Abyssinia would all have to combine their powers to defeat her, some of her abilities ignore conventional durability) | Varies depending on who she is possessing and how many stars she has obtained (gains all of a host's power plus a portion of her old magic equivalent to how many of her six stars she has obtained) | Universe level+ (All of her old power combined with that of Celestia, Luna, Cadence, Twilight, Zecora, and Big McIntosh) | Unknown (Was still capable of harming Spike the Dragon in his dog form)

Striking Strength: Unknown | Varies | Universal+ (Should have the combined striking strength of everyone she fused with her) | Unknown (Likely weak)

Durability: Universe level+ (Required the combined forces of the Elements of Harmony, Discord's chaos magic, Queen Novo's Pearl, and the magic of King Aspen and the king of Abyssinia to be sealed away) | Varies depending on who she is possessing | Universe level+ (The durability of her base form increased by adding the powers of all four alicorn princesses, Zecora, and Big McIntosh) | Unknown, claimed that she would still be unable to be destroyed as the spirit of malice

Stamina: At least extremely high | Varies depending on who she is possessing | At least immense | Unknown, at least average (Still tried to attack Spike after losing all her power, rearranged Luna's rock gardens on the moon in a short period of time)

Standard Equipment: None | One or more of her 6 stars plus any equipment her host has | Her 6 stars | None

Intelligence: A skilled manipulator and spellcaster | Has all of her own intelligence in addition to that of the knowledge and memories of whoever she's possessing | Possibly Extraordinary Genius due to likely holding all her own knowledge plus that of Twilight, Celestia, Luna, Cadence, Big Mcintosh, and Zecora | Unknown, should at least retain a portion of the knowledge she learned from accessing her hosts' memories in addition to all of her own intelligence

Weaknesses: None Notable | Someone has to be wearing one of her stars and they need to be powerful enough in order for her to possess them, needs to re-obtain all her stars to regain her true power, hosts bodies are no more durable than they are normally which could make her a glass canon | If her stars are removed, she will lose her power. If the stars are destroyed, she will permanently be reduced to a weak and tiny form | Can't use any of her powers

Cosmos merged with her stars' hosts

Cosmos' defeat
Add a photo to this gallery