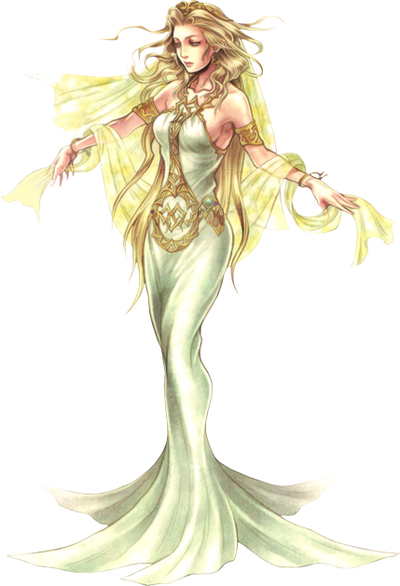 Cosmos (コスモス, Kosumosu) is the goddess of harmony who opposes Chaos in Dissidia and Dissidia 012. She is one of the two completely original characters of the games, the other being Feral Chaos.

Attack Potency: At least Large Planet level, possibly Galaxy level (She is Chaos' equal for most of the cycles. Shantotto's dialogue implies that Cosmos would have defeated Gabranth with the same level of ease as Chaos did Cloud)

Speed: Sub-Relativistic via power-scaling to Chaos

Durability: At least Large Planet level, possibly Galaxy level (Was only killed after weakening herself to create the Crystals before being confronted by Chaos himself)

Range: Dozens of meters with magic attacks, hundreds of meters when grown to maximum size.

Intelligence: She's serene, calm, and level-headed as the leader of the Warriors of Cosmos. Although she provides them with free reign to do as they please, she is keen enough to advise them in order to help them and completely wiped out the Manikins invading her sanctum in order to protect the Warrior of Light and provided her warriors with her power in the next cycle. She managed to keep this plan concealed from Chaos, which led to his eventually defeat in the thirteenth cycle even though it came at the cost of her own life, showing able leadership and strategy in addition to a self-sacrificing nature.

Weaknesses: She's kind-hearted and a pacifist by nature. She has been greatly weakened following the events of the twelfth cycle.