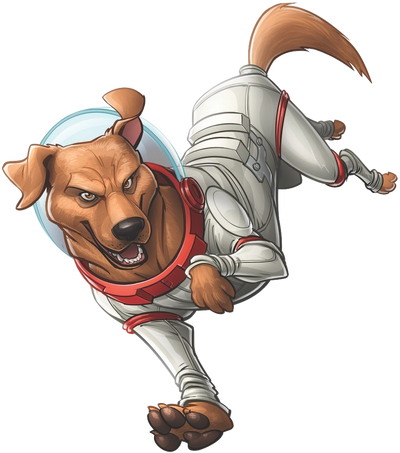 Cosmo is a telepathic Russian space dog who serves as the Head of Security of Knowhere in the Marvel Comics universe. This character was created as a reference to Laika by Dan Abnett and Andy Lanning, and first appeared in Nova vol. 4 #7. Cosmo is the security chief of the space station Knowhere, and a member of the Guardians of the Galaxy. He has proven to be an invaluable ally to the Guardians of the Galaxy.

Age: Unknown, likely between his middle 50s to 60s (The Soviet Space Program primarily tested space flight on dogs between 1957 and 1966)

Powers and Abilities: Superhuman Physical Characteristics, Longevity, Enhanced Senses (Superhuman sense of smell and hearing, as well as the ability to telepathically sense other strong-minded beings), Telepathy (Which also works on robots, such as Vision), Telekinesis (Can make telekinetic blasts, lift and throw things), Energy Projection (Can project psionic force bolts which have no physical effects but can affect a victim's mind so as to cause the victim pain or unconsciousness, force them to suffer from a stroke, or turn someone brain-dead), Forcefield Creation (Can create telekinetic barriers), Illusion Creation (Can create realistic and very detailed illusions and cause people to experience events which are not actually occurring), Perception Manipulation (Can alter the apparent physical appearance of himself and other people by altering the perceptions of those around him, such as making himself appear dead in someone's mind and manipulating the target of someone's attacks into a monster), Invisibility (Can make himself and others appear invisible, can mask his presence and the use of his abilities from being detected by other psions and psychic entities and can extend these defenses to others around him), Mind Manipulation (Can control the thoughts and actions of others such as forcing people to stop fighting, read minds, and telepathically sedate his victims so that, if already rendered unconscious, they remain so for as long as he continues to sedate them), Fear Manipulation (Can use his telepathy to make opponents experience their greatest fears), Resistance to Mind Manipulation (His telepathy is strong enough to grant him a passive resistance to Abyss' mental influence, which turns sentient life-forms into meat puppets under its control), Gravity & Radiation Manipulation (Survived being sucked into a fake black hole)

Attack Potency: Small Building level (Physically on par with Rocket), Solar System level with Telekinesis (Knocked back and defeated Adam Warlock, Defeated Starlord, Rocket, Gamora, Mantis, Drax, Adam Warlock, Quasar, and the Luminals with one telekinetic blast, While weakened by telekenesis-dampening poison he was able to temporarily restrain Skaarn, Quasar and Silver Surfer are scared of him), Many of his abilities ignore conventional durability

Weaknesses: Powerful telepaths can see through his telepathic cloak, telepaths stronger than himself can block out his influence and disable him