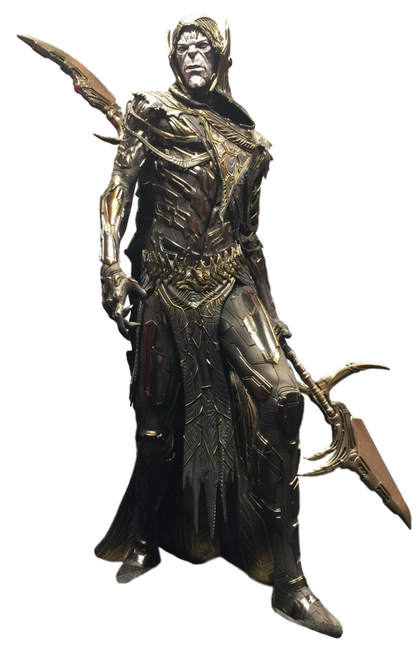 Corvus Glaive was one of Thanos' children, and a member of the Black Order. After retrieving the Space Stone with Thanos and his siblings, Corvus Glaive and Proxima Midnight traveled to Scotland and ambushed Vision and Scarlet Witch. Corvus Glaive tried to take the Mind Stone, but Captain America, Falcon, and Black Widow arrived, and he was wounded by Black Widow.

Corvus Glaive attempted to take the Mind Stone from Vision in Wakanda later. However, he was killed by Vision, who used his own weapon to stab him in the back.

Powers and Abilities: Superhuman Physical Characteristics, Master Combatant, Limited Power Nullification (He can prevent Vision from phasing with his weapon, Glaive), Weapon Mastery, Attack Reflection and Energy Absorption with Glaive (Can absorb and block attacks according to WoG and he was able to block and redirect Vision's Mind Stone blast in the film)

Attack Potency: At least Building level (Overpowered Captain America), far higher with Glaive (Stabbed through Vision, who is made of vibranium)

Durability: At least Building level. His weapon, Glaive can tank far higher attacks (Tanked a Mind Stone blast from Vision and redirected it back towards him)