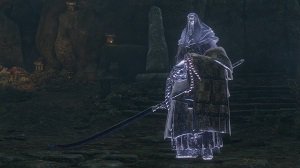 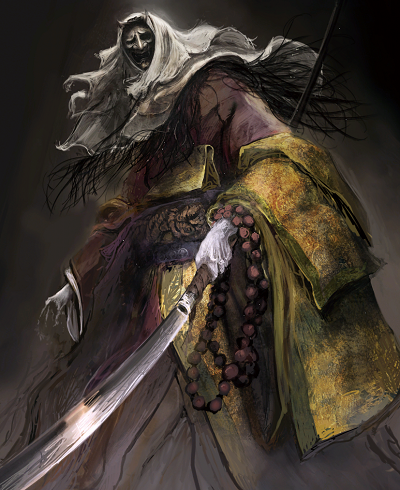 Corrupted Monk (real name Yao) (破戒僧, Depraved Monk) is a boss in Sekiro and a reappearing minor antagonist. She guards the Vermillion Bridge that leads to the Fountainhead Palace, while her spiritual form protects the shivering stone from non-Mibu villagers. She is also one of the infested, granting her immortality.

Powers and Abilities: Superhuman Physical Characteristics, Weapon Mastery (Naginata proficiency), Inorganic Physiology (Is a physical illusion), Self-Sustenance (Type 1, 2 and 3), Resistance to Illusion Nullification | Superhuman Physical Characteristics, Immortality (Type 1, 2, 4, 6 and 8), Fear Manipulation and Death Manipulation via Insect Manipulation (Yao can vomit insects that cause the Terror effect to build up), Resurrection, Weapon Mastery (Naginata proficiency), Illusion Creation (Can create dark illusionary copies of her self that teleport) and Weather Manipulation (Creates a thick fog along with her copies)

Range: Extended Melee Range due to her size and the length of her naginata.

Intelligence: Unknown (Is a fairly skilled combatant and illusionist)

Retrieved from "https://vsbattles.fandom.com/wiki/Corrupted_Monk?oldid=5922064"
Community content is available under CC-BY-SA unless otherwise noted.