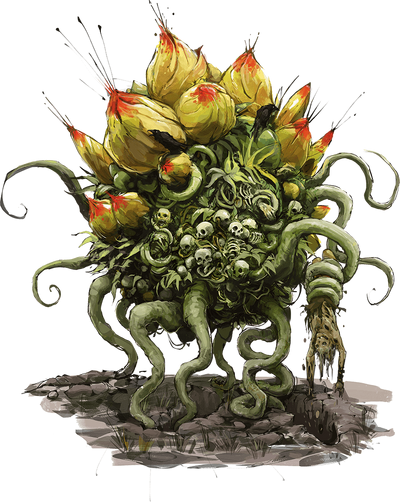 The Corpse Flower is a malevolent plant species that rises from atop the grave of an evil necromancer or powerful undead. Beginning as a seedling, they quickly grow to a large size within the course of weeks before ripping itself free of the ground. When fully grown, the creature will begin to and actively collect various humanoid corpses across graveyards and battlefields which it uses for future use, represented by it's abilities.

Corresponding with it's malevolence, it has an utter hatred for the living

Powers and Abilities: Superhuman Physical Characteristics, Non-Physical Interaction (As a magical creature, it can properly interact with intangibles, incorporeal, conceptual, and nonexistent beings), Natural Weaponry (It's tentacles can be used as such, which can additionally inflict poison on contact against foes), Enhanced Senses (Blindsight, can perceive targets within 60ft. despite lacking eyes), Self-Sustenance (Type 3, as a plant it doesn't require sleep), Surface Scaling, Necromancy and Healing (At any time, the Corpse Flower can either digest a corpse on it to heal itself or reanimate said corpse into a zombie, which while not under direct command of it, will automatically act as an ally to the Corpse Flower), Nausea Inducement and Fragrance Manipulation (Passively emulates a stench that causes creatures within 10ft of it to become nauseated, Zombies that were reanimated by it also possess this same trait), Extreme Resistance to Blindness/Deafness/Stun Inducement, Paralysis Inducement, Mind Manipulation, Poison Manipulation, Sleep Manipulation, and Transmutation

Speed: Hypersonic+ with High Hypersonic+ reaction speeds (Can catch up with those that can dodge Call Lightning)

Stamina: Infinite, while it does require substance it does not need to rest

Range: Extended melee range with physical attacks, in addition to its stench.

Intelligence: Below Average, has an intelligence that scales below that of the average human, isn't implied to have any particular form of strategy in combat other then its natural defenses

Weaknesses: Its stench does not affect those that have a high resistance to poison, Below average intelligence

Retrieved from "https://vsbattles.fandom.com/wiki/Corpse_Flower?oldid=5976990"
Community content is available under CC-BY-SA unless otherwise noted.