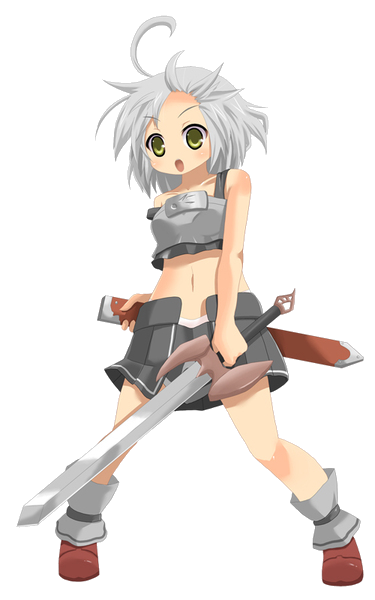 Corona is a playable character in Wonderful World. The Assistant Head to the Knights of Eimeru, a type of honor student liked by anyone and works hard on everything. However, she gets thrown around because of this. She has powerful light magical power and be good at self healing and seal magic. Originally, the magic of self healing is the limit to heal a scratch, but her magic is so strong that it can suture and heal even the cut itself. At one point, she had been kidnapped and captured by a certain organization that wanted ability. At that time she was assisted by Ryuza who happened to appear and joined the Knights as it was. She deeply loves Ryuza, her benefactor, and every day she works desperately for administrative work for him. Corona's best friend is Lemius, who's room is opposite hers, She often cooks and go shopping with her. Especially in juniors there is popularity among the knights. It seems that she is concerned about her poor body.

Powers and Abilities: Superhuman Physical Characteristics, Linguistic Magic (Corona can unlock additional Moves, including another Finish Skill), Enhanced Swordsmanship (Can slash an opponent as fast as she can put her blade back in her sheath), Divine Attacks (With moves such a FINISH SKILL with massive range just by one slash, A shield that surrounds her in increasing diameter, even the ability to heal), Regeneration (Mid-Low) (Despite its imperfect speed, Corona is able to heal acceptably gory gashes while chanting. If this fails, she can still gain life by using a successful Requiem Gain to gain life while damaging the opponent), Weapon Creation (Zephyria creates a Blade of Light thanks to Corona's magic.) Seal Magic (Zephyria is capable of this; but gameplay shows no proof. It can create, or destroy this.)

Intelligence: High, should be smarter than Ryuza in terms of his office job, & is an expert medic.

Weaknesses: Tries to hard to do her job, According to A World of Darkness, her fan club can be annoying, if she doesn't know someone, she is cross.

Feats: Corona can kill dark entities with the power of her blade of light: Zepheria. She is also a chief medic of the Eimeru Knights, healing very huge wounds. She also has full mastery over Holy Magic.

Retrieved from "https://vsbattles.fandom.com/wiki/Corona_(Wonderful_World)?oldid=6600570"
Community content is available under CC-BY-SA unless otherwise noted.