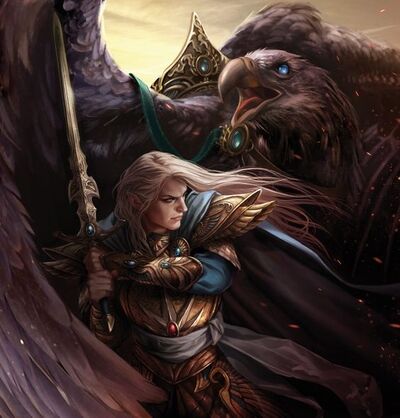 Corellon Larethian is the chief of the Elvish gods, and controls the majority of all Elves within the multiverse. He is often shown to be at odds with other deities such as Gruumsh, and is responsible for the loss of said deity's other eye. In the days before creation began in full, Corellon had no true form- he danced across the uncivilized planes, just as likely to appear as a swarm of bees as a beam of light. When he found another god, he would be a rose, or take over their form- indeed, this caused the clash with Gruumsh, god of the Orcs, who could know no such beauty.

What few realize is that Gruumsh's ire was respected among the divine houses- few gods contested his right to challenge Corellon. The battle broke out due to Corellon ignoring the god's contempt. As the battle raged through dozens of planes of existence, Corellon bled even as he defeated the Orc god, and from this blood rose the first primal elves (quite possibly the progenitors to the LeShay). Corellon picked some of these original elves and gave them holy names, and thus the gods of the Elves were born. Among these was Lolth, who immediately rebelled against the teachings of her father and caused a divide between elves and drow. Thus the creation story of the Elves goes.

Gender: Varies, but usually male (Corellon usually appears as and is referred to as male but can freely change forms and genders)

Attack Potency: Planet level (Capable of battling the Leviathan, which would have destroyed the world should it awaken) | Multiverse level+ (His Divine Rank is superior to Mystra whose death reordered the multiverse. Considered to be one of the most powerful gods in existence)

Speed: At least High Hypersonic+ (vastly above Rangers who can dodge lightning) | Unknown, likely Infinite (Is vastly above the time-deities beneath him, able to control the space-times of his own realms)

Intelligence: At least Extraordinary Genius, acts as a patron of all art forms and all other virtues of the elves- this includes magic far beyond the comprehension of most mortal creatures