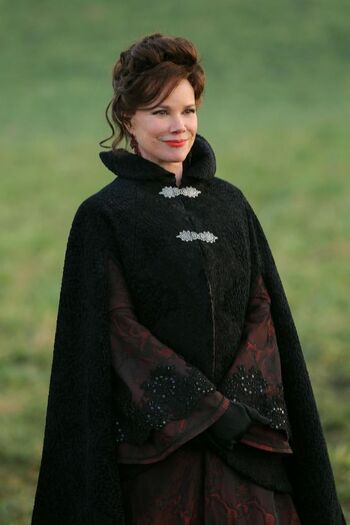 Cora Mills is a supporting character for the Once Upon a Time TV show.

The cruel and controlling mother of Regina, Cora appears to have forgotten her humble origins, and the unwanted first born daughter that came with it, whom she forsook when she formed a liaison with the powerful Rumplestiltskin in order to get access to magic and turn her life around.

Her power got to her head, however, and Cora started going to extreme lengths to control her daughter's life, claiming it to be the best for her. Eventually, Regina pushed her through a looking glass and into Wonderland, where she became the notorious Queen of Hearts. Cora eventually found her way back to her daughter after the breaking of the Dark Curse, with a master plan in mind. However, she was ultimately killed by Snow White.

Age: Unknown. Probably in her Fifties

Attack Potency: Human level physically. At least City level, likely Large Country level with Magic (Trashed both her daughters. Sometimes feared by Base Rumplestiltskin, although he always says that he is more powerful. Should be at least comparable to Ingrid). Can ignore conventional durability with Heart Extraction, Transmutation and others

Speed: At least Subsonic (If scaled to Regina)

Lifting Strength: Above Average Human physically (Held Archie with one hand in the air). Class 25 with Telekinesis via powerscaling from Regina

Durability: Human level physically. At least City level, likely Large Country level with shields and protective charms (Superior to Zelena. Her defensive magic should be at least comparable to her offensive, as they share the same source)

Weaknesses: Laws of Magic (Can't bring back the dead, force someone to fall in love and change the past), Price of Magic (Inevitable expense for using or casting magic, comes in many forms), Squid ink (Magical product obtained from magic squids, can be used for freezing a victim in their place), Her heart (Can be killed or controlled, if her heart is found)